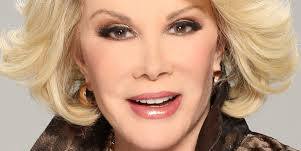 NEW YORK—Famed comedienne Joan Rivers died on Thursday, September 4 at the age of 81. Rivers was hospitalized for more than a week after having a throat procedure on her vocal chords, where she stopped breathing and went into cardiac arrest.

She was rushed to Mount Sinai Hospital where she was put into a medically induced coma; Rivers was taken out of the coma on September 2 where she was on life support before she died.

Her daughter, Melissa Rivers, made the announcement via a statement to the public reading, “It is with great sadness that I announce the death of my mother, Joan Rivers. She passed peacefully at 1:17 pm surrounded by family and close friends. My son and I would like to thank the doctors, nurses, and staff of Mount Sinai Hospital for the amazing care they provided for my mother.

Cooper and I have found ourselves humbled by the outpouring of love, support and prayers we have received from around the world. They have been heard and appreciated. My mother’s greatest joy in life was to make people laugh. Although that is difficult to do right now, I know her final wish would be that we return to laughing soon.”

The news of the comedienne’s death had many in Hollywood going to Twitter to share their sentiments of the funny lady and fashionista on their lives.

Rivers was a trailblazer in the industry that had been dominated for years by men. Larry King tweeted, “.@Joan_Riverswas a dear & wonderful friend who I’ve known for 45yrs. Great guest, pal, comedian & mother. We will never see her likes again.

“Fashion Police’ co-star George Kotsiopoulos tweeted, “Rest in peace @Joan_Rivers. Thank you for changing my life. I will miss you so much.”

Kathy Griffin tweeted, “A legend, a friend, a mentor, an icon, and wildly funny. One of a kind. RIP #JoanRivers@joan_rivers.”

Ellen DeGeneres tweeted, “Joan Rivers will always be a pioneer. She paved the way for a lot of comedians. I’m very sad she’s gone.”

Rivers was born Joan Alexandra Molinsky on June 8, 1933 in Brooklyn, New York. She was married twice during her lifetime; first to James Sanger in 1955 and Edgar Rosenberg in 1965, where daughter Melissa Rivers was born from that marriage.

She grew to fame as a guest host on “The Tonight Show” alongside Johnny Carson whom she noted as a big influence on her comedy career. Rivers was known for taking jabs at herself during her comic routine, as well as other celebrities. She delivered a level of brass comedy that had not been seen before in the comedy arena by a female before.

Rivers had a falling out with Carson  when she launched her own program in 1986 on Fox, “The Late Show with Joan Rivers.” She became the first woman to have a late night talk show on a major network. Rivers was banned from appearing on “The Tonight Show” for nearly 25 years, but appeared on the show hosted by Jimmy Fallon on February 17, 2014 for a brief appearance.

Rivers and her daughter Melissa became notorious for hosting live interviews with celebrities during the red-carpet for big time award shows like the Academy Awards and Golden Globe ceremonies. In September 2010, Joan became a staple on the E! show “Fashion Police” alongside Giuliana Ranci, Kelly Osbourne and George Kotsiopoulous where the panelists provided their thoughts on the fashion of celebrities at big-time award shows.

She also appeared on the WE TV reality show “Joan and Melissa: Joan Knows Best?”  Joan leaves behind her daughter Melissa and her grandson Cooper. She was laid to rest on Sunday, September 7, at Temple Emanu-El in Manhattan, New York at a star-studded event that included the likes of Whoopi Goldberg, Howard Stern, Kelly Osbourne, Guiliana Rancic, Donald Trump, Barbara Walters, Sarah Jessica Parker, Diane Sawyer and Hugh Jackman to name a few.

Throughout her career Joan released several books including two autobiographies, appeared in countless movies, including “Iron Man 3” where she had a cameo and TV shows. She won a Daytime Emmy Award for Outstanding Talk Show Host in 1990. The exact cause of death for Rivers is still under investigation.