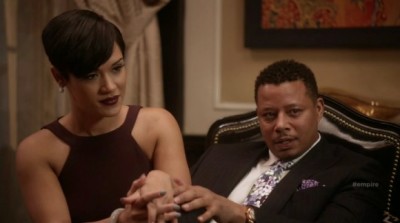 HOLLYWOOD—In this week’s episode of “Empire,” Lucius is still trying to push his youngest, Hakeem into getting his ‘act together’ so he can take over the company. As mentioned previously, Lucius has a deadly illness, leaving him with no more than three more years on his throne.

In “False Imposition,” Lyons finally opens up to Anika, his unmarried spouse, about not having much time to live, and explains to her why he’s been so hard on her and his children about running the company.

Cookie has been trying to build a better relationship with her children, especially Hakeem. She now manages Tiana, Hakeem’s new beau and has big plans for her as a new star.

Hakeem and Tiana, now known as “Takeem,” was also asked to perform at the Teen Choice Awards, but when Tiana walks in on Hakeem soaking in bubble baths with his much older beau, Camilla (Naomi Campbell), he fears she had changed her mind.

Tiana, young but wise, later lets him know how hard she’s worked and that she isn’t going to let him get in the way of her career. This could be an end to their puppy love.

Jamal, the second oldest, walked out on his lavish lifestyle in the last episode to teach his father a lesson. As he tries to adjust to his new lifestyle, while living in a cruddy apartment, its’ preventing him from making music.

Lucius deals with trying to sign a rapper named Titan, who was recently arrested on a gun charge. He shot someone after a brawl that occurred after his concert. Now most of you are probably wondering what the significance is with this rapper?

Well turns out, he is managed by a man named Barrette, who used to also manage Lucius. Lucius and Barrette exchanged words in a night club as they haven’t spoken in years and Lucius claims it’s because he stole millions from him.

Lucius then decides to visit Titan in jail in hopes of stealing him from Barrette. It’s unclear if Lucius want’s Titan moreover because of his talent or just to get back at his manager.

One thing’s for sure, everyone is after one thing. If there’s one goal this family has in common its’ money and success. But who actually is motivated the most the take over the Empire?

Ironically, it’s the oldest son, Andre, who is also dealing with his bi-polar disorder. In one scene, Andre, Lucius, and business partner Vernon (Malik Yoba) are in a conference when a detective walks in with news about Bunkie’s death.

The detective questions Lucius regarding his whereabouts on the night Bunkie was killed. Andre lie’s for his father, saying they were watching the Mayweather fight at home.

Andre somehow has reasons to believe his father killed Bunkie, but doesn’t say. Probably because he wants to show his loyalty to his father.

At that moment, the scene gives us a flashback explaining why Andre protected his father from the detective. Young Andre, at the time, and Lucius were in the kitchen singing together while Andre is on the floor playing with his toys.

Suddenly police are at the door, leaving Andre to hide his father’s gun in his toy box, just before they raid the house. He later hands the gun to his father and Lucius looks at his son like he was “proud.”

Walls Close In On Gabi Hernandez On “Days!”

Chaos Erupts On “The Bold And The Beautiful!”

“Survivor: Winners At War” Kicks Off!