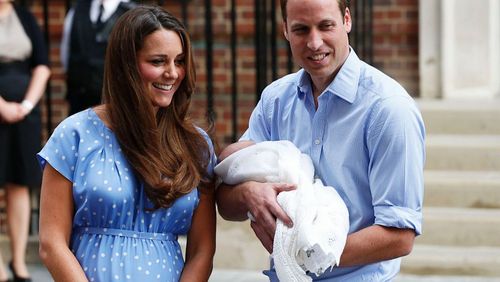 All eyes stared at the door, after it was announced on the royal easel board yesterday that they welcomed a beautiful baby boy who would be the 22nd Century King of England. The two sported baby blue, with Kate wearing a blue and white polka dot dress. Prince William wore a blue button down shirt. The baby was wrapped in a white blanket and spectators could see his little fingers popping out as the cameras got close-ups of the baby.

The couple was all smiles and took the time to answer questions and pose for the cameras; similar to what Prince Charles and Princess Diana did nearly 31 years ago. On Wednesday, July 24, William and Kate indicated the name of their newborn to the rest of the world, as Prince George Alexander Louis.