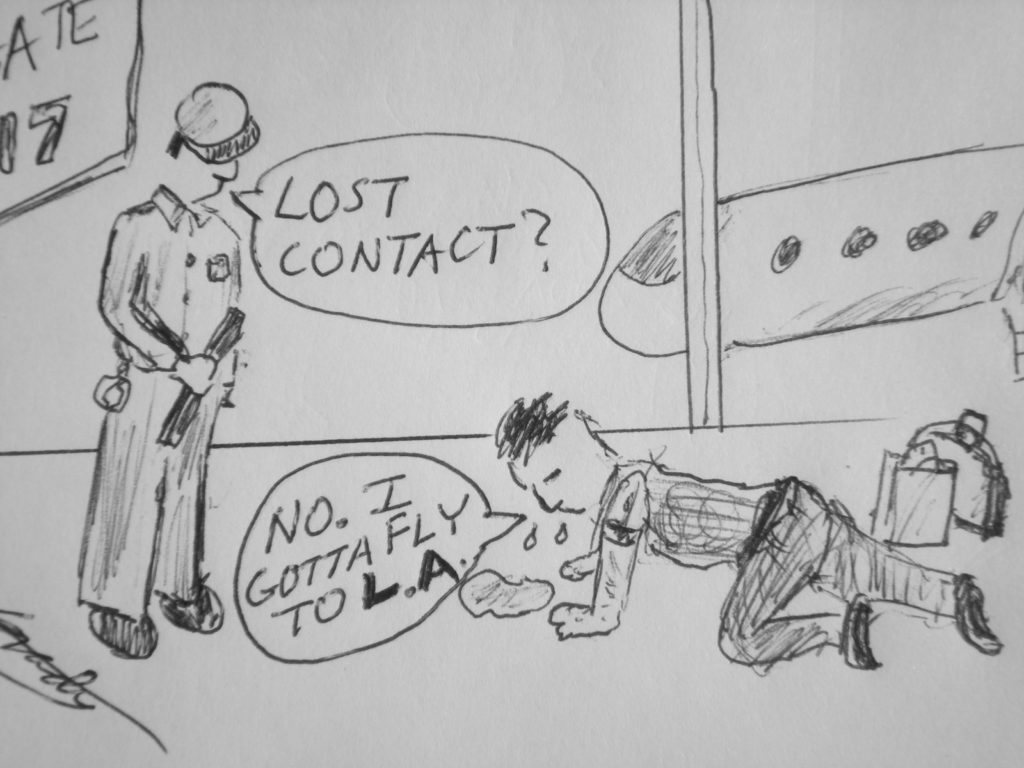 UNITED STATES—The subtitle to these Los Angeles memoirs (1989-90), in that little silly white brain of mine, was going to be “How I Almost Got to Be A Racist,” in view of current events involving the law and black people I will acknowledge this subtitle rather than hide it. Kind of like opening up the bandage over the wound and let it dry out.

My hosts in New York, Guadalupe and Silvio, shared a family anecdote that helped me deal with my own reactions to the appalling turns in the lives of some black people I had rented to. On the one hand, people like the white handyman were rebels from the get-go, him and his two-beer breakfast, but somebody like Lawrence had his job, his religion, his life on track and then, overnight, it derailed.

Silvio recounted how Guadalupe’s brother-in-law was a policeman in Florida and they theorized he had become a racist due to the nature of who he dealt with in his job—people who were trouble or were suspected, wrongly, of being trouble.

If I’m digging a kind of hole here with this topic, so be it; I’m gonna keep digging. I’m still groping after years. My friends’ talk about their in-law cop in Florida inspired me to detach from a handful of tenants being suddenly down on their luck as it pertained to the rental business. I would remain open and hope everybody’s references stacked up, for to accrue prejudice is a danger of living and doing this kind of job, whether policeman or building manager, and coming into high doses of hood reality. Funny to think this twisted path all started with a free room for me in which to pursue my art. Well, I guess it wasn’t free.

During the final stretch of the long weekend in Silvio’s world, Queens, New York, Woodside to be exact, there were a lot of art and artists. The painter Jorge Posada, writer Plinio Garrido. Alejandro Stuart was a Chilean photographer who’d lived in Mexico in the mid 70s. He smuggled footage of Pinochet’s coup out of the country, delivering it to the Swedish Embassy in Santiago and then recovering it from the Swedish Embassy in Mexico City, after it was delivered by diplomatic courier. A great bear of a man who sang snatches of his own Trova Nueva, Alejandro came one morning to take a pictures of Silvio. He got some great shots of Silvio posing behind the bars of a gate, appropriate for a cultural outlaw.

In Woodside, I also met Beatriz I young playright of “Mujeres Perdidas” (lost women) about Colombian tourists who get lost on the New York subway and end up on 42nd Street, which was  then a raw, stench-filled, dangerous combat zone . . . before Disney got to it.

The last night of my visit we made contact with a friend from Los Angeles, via Reno Nevada, Andrew Thomas who was in Manhattan studying urban planning at NYU. Just a few years earlier, he was painting houses in Oakland and wrote a decent book of stories, “Lost Angeles.” Here were all at the crossroads of life in one August night in Manhattan. We talked about the possibility of a war in Kuwait, after Iraq had invaded it. It took being in New York to get this on my radar; this Kuwait thing seemed strange and remote. Ever since my childhood and the pain of Vietnam, the U.S.A. had an ingrained aversion to war.

Now the cloudy skies of New York, so peaceful a break from blazing Los Angeles, became an ominous backdrop for a countdown to war that was already underway. It was almost sci-fi after the long period of post-Vietnam peactime, something like 16 years.

I had seen so many things during four days, from plays to the art of Klimt and Egon Schiele. It was unbearably sad to leave New York, my friends and the good times. I wept at the airport. The night before, in a bar we, were talking before eating Chinese and, simultaneously, on the TV screen the image of a soldier morphed into a businessman in a suit with briefcase. How we laughed about that and marveled the whole night through. It was like, “Oh, did you see that? Can you believe what we just saw on the TV?” Stranger things were to come.

Grady Miller is a humorist and the author of “A Very Grady Christmas: Three L.A. Christmases” (available on Amazon).