UNITED STATES—Among the vast number of scenarios that experts were anticipating for the United States’ Presidential election, one was the most feared by market participants – a contested election result.

Most seasoned investors believed that a contested outcome could lead to a spike in market volatility, as such a scenario could result in higher levels of social unrest with potential long-lasting political consequences.

However, although that ‘dreaded’ scenario did occur, the crash that financial professionals were widely anticipating never happened.

In fact, markets reacted in exactly the opposite way that many forecasted, as broad-market indexes rallied significantly even after acting President Donald Trump decidedly disputed the outcome of the political event.

Why exactly the tables turned in such a drastic way? You might be wondering.

The following article aims to answer that question by highlighting the importance of a Congress gridlock as the key driver behind this unexpected shift in market sentiment.

How did market volatility behave before and after the US election? 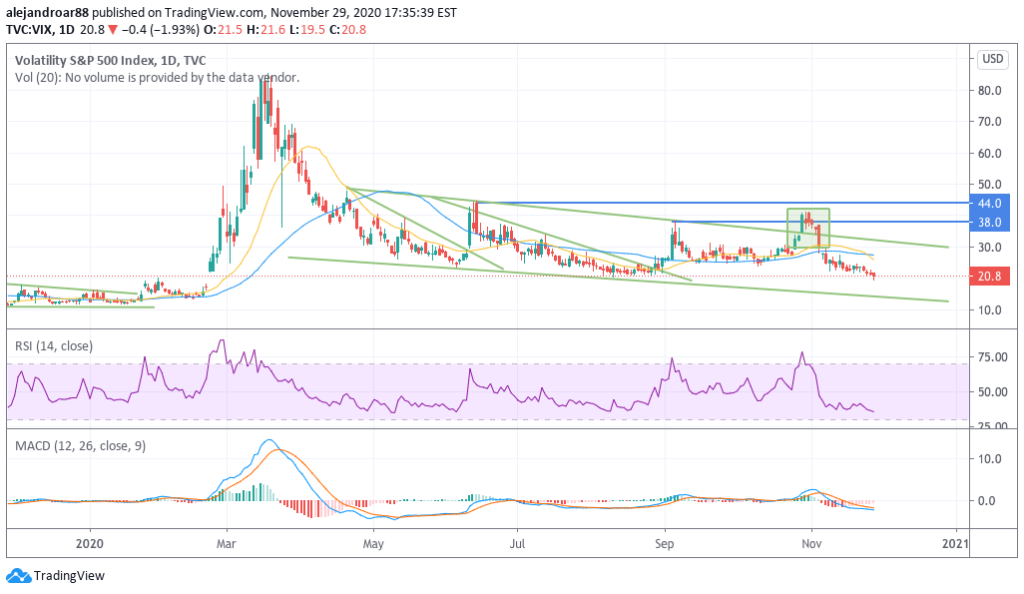 Market volatility – as tracked by the S&P 500 CBOE Volatility Index, also known as the VIX – spiked in the days that preceded the US election, as a strong resurgence of the virus across Europe and in the United States plunged the stock index to its lowest levels since late September.

During those days, the VIX broke above the downward price channel shown in the chart and ended up spiking to levels only seen in June, back when the number of daily virus cases was also jumping in the United States.

However, on the day of the election, market sentiment was lifted by news of a Congress gridlock – a situation that Wall Street saw with good eyes as the chances of a new administration implementing significant policy changes was highly diminished, including a feared tax increase if Joe Biden were to win.

Since then, the VIX has drifted to its lowest levels since the pandemic was announced in late February, almost closing the entire price gap that it left behind on February 24 during last Friday’s trading session.

Recent news about Trump’s administration granting Biden’s team access to federal funds to cover the expenses related to the transition have contributed to lifting the markets recently, as the risk of political instability in light of President’s Trump ongoing fraud claims is now considered very low.

Meanwhile, positive news on the vaccine front coming out of Pfizer (PFE) and Moderna (MRNA) have also pushed market volatility down to a 10-month low, with market players now focusing on the risk of extreme greed and complacency as this situation could to a short-term pullback for equities.

In this regard, a historically low put-to-call ratio – as measured by CBOE Equity Options volumes – along with a 92 level in the CNN Fear & Greed Index, considered as a situation of Extreme Greed, are increasing the risk of a correction as sellers could take over if volumes dry up over next few weeks.

Can the December 14 electors’ vote end up pushing volatility higher?

The window for winning the different legal disputes that President Trump’s team has filed in multiple states is closing in as electors are scheduled to meet on December 14 to formally nominate the next US President.

However, the deadline for Trump’s legal team is actually earlier, as states must certify their vote counts at least 6 days before electors meet, which means that December 8 will be a crucial day for financial markets.

Once electors cast their ballots, a Biden win will likely trigger a volatility meltdown, as the chances of disputing the outcome of the election will effectively subside to near zero.

With the risk of political instability out of the picture and a vaccine possibly getting emergency-use approval from the US Food and Drug Administration (FDA) before the end of the year, the two major negative catalysts for the markets might be considered under control, although the risk of a pullback remains high as a result of the latest levels of complacency.

The US election ended up providing a positive short-term catalyst for stocks against all odds, as a gridlock situation in the US Congress had Wall Street cheering since no meaningful regulations are likely to be passed without bipartisan support.

Meanwhile, December 8 and 14 remain important dates to keep an eye on as a certified Biden win could put a definite end to President Trump’s chances of disputing the election outcome – allowing Wall Street to put political instability risks in the rearview mirror as the Christmas holidays approach.

Food Rocket Is Revolutionizing The Grocery Game And We Love It