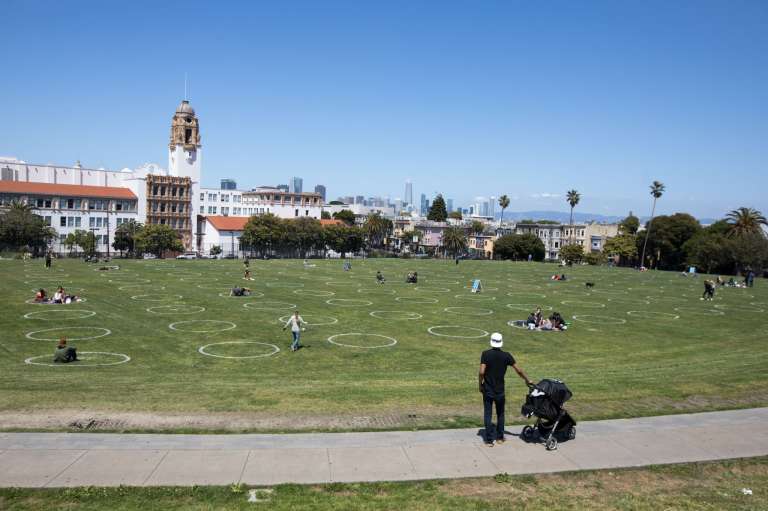 SAN FRANCISCO—On May 20, the San Francisco Parks and Recreation Department initiated the drawing of 6-feet wide, chalk circles throughout Dolores Park. The department’s plan is to promote social distancing among park-goers during the current coronavirus pandemic.

As the Bay Area transitions into the second phase of Governor Gavin Newsom’s plan to reopen the state, city officials have said that the purpose of the circles is to remind people to maintain a distance of 6-feet apart while outdoors. The Parks and Recreation Department was influenced by New York’s use of this tactic to enforce social distancing in their own parks.

The strategy to reduce the spread of coronavirus by combating overcrowding at parks was the result of Mayor Breed’s proposal to eliminate access to parks. During Breed’s press conference on May 4, she said:

“We know that people need fresh air, they want to be out. But if we continue to see that behavior become problematic at Dolores Park, it will no longer be available.” She also informed the public that officers would be monitoring compliance of preventative measures by park-goers. These chalk circles are a visual reminder to avoid overcrowding, a major issue that was being faced by the city earlier in the month.

Opposing accounts of social distancing by individuals at parks in San Francisco have been tweeted to Mayor Breed in addition to suggestions to resolve the issue.

To decrease the number of social distancing violations in San Francisco, chalk circles were also drawn in Washington Square Park. Chalk circles are also expected to be used at the Little Marina Green Picnic Area.