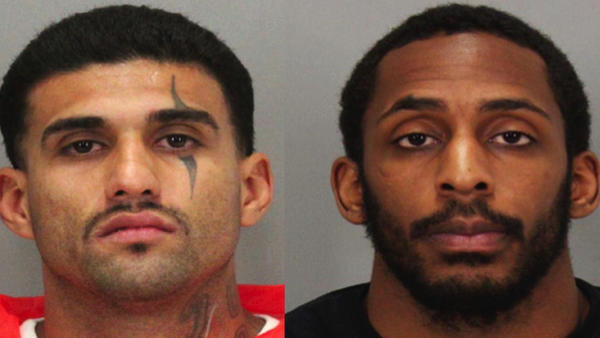 SAN JOSE—Santa Clara County Jail inmates, Rogelio Chavez, 33, and Laron Campbell, 26, who escaped from their prison dormitory by sawing through the bars of one of the second story windows, on Wednesday, November 23, have been captured.

Chavez and Campbell, along with two other detainees, used old clothes and bed sheets to hoist themselves up to a window and lower themselves to the ground outside of the jail cell. The two other inmates were captured before they could successfully escape the facility.

Campbell was recaptured on Tuesday, November 29 at the home of his sister, Marcaysha Alexander’s in Antioch. According to reports, he fell through the ceiling during an attempt to hide in the attic, police indicated.

Alexander was arrested and charged for sheltering a fugitive. She is being detained at the Elmwood Correctional Facility in Milpitas on a $250,000 bail.

Chavez reportedly evaded recapture on Sunday, November 27 at a Days Inn Motel in Gilroy. Upon receiving word of Chavez’s potential location, authorities set up surveillance cameras at the motel, but Chavez was not found.

Police continued their search in Gilroy and upon further investigation encountered Emily Vaca, 35, who was believed to have assisted Chavez during his escape by driving him around the county, according to police. She was arrested in Gilroy on November 29.

On Wednesday, November 30, Vaca appeared at the South County Courthouse in Morgan Hill and was charged with serving as an accessory to a felony, in addition to facing allegations for prior incarceration. Vaca is being held on a $70,000 bail.

Police stood outside the apartment for nearly eight hours, continuously discharging tear gas into the complex, according to reports.

Officials stated that residents of the Coy Park apartment complex were instructed to take shelter as police searched the building. Karla Fernandez, 34, was arrested at the apartment for reportedly being an accessory to Chavez. Chavez was reportedly under the influence of drugs and in possession of cocaine and marijuana when taken into custody by police.

Chavez and Campbell are being held in section of the jail with higher security precautions at the Main South Jail facility.