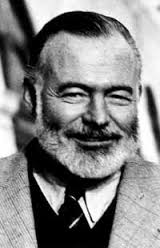 UNITED STATES—The Hemingway table often combined both eating and drinking. In his memoir of the Paris years, “A Moveable Feast,” Hemingway writes rhapsodically of eating oysters washed down with wine: “As I ate the oysters with their strong taste of the sea and their faint metallic taste that the cold white wine washed away, leaving only the sea taste and the succulent texture, and as I drank their cold liquid from each shell and washed it down with the crisp taste of the wine, I lost the empty feeling and began to be happy and to make plans.”

If we were to put healthy as an eating style in the boxing ring versus what Hemingway has got going here with the oyster, he’d be a knockout every time. You see how the cold white wine meets the taste of the oysters and there figures one of the most intimate dimensions of the eating experience, texture: the succulent oyster texture, the crispness of the wine. And then it crescendos in feeling, terminating in a whole change of outlook. “I lost the empty feeling,” writes the author, “and began to be happy and to make plans.”

It illustrates the marriage of food, drink, sensation and feelings – completely at odds with many “sensible” diet plans that would have us eat sawdust to attain that model body. In Hemingway’s food world, sensory trumped sensible. And drink was pivotal. An avid tippler, Hemingway made no bones about the high place he afforded to wine and spirits, “I would as soon not eat at night as not to have red wine and water.”

He summed up his love affair with drink writing to a Russian friend (1935): “I have drunk since I was fifteen and few things have given me more pleasure. When you work hard all day with your head and you know you must work again the next day what else can change your ideas and make them run on a different plane like whisky? When you are cold and wet what else can warm you? Before an attack who can say anything that gives you the momentary well being that rum does?”

The 50 year-old Hemingway claimed to not drink alcohol after 6 p.m. and said it freed him from hangovers. Did he drink like a fish? During his African safari in the 1950s before he had been awarded the Nobel Prize he mused that Churchill drank twice as much as he did and had been awarded the Nobel Prize. He vowed to “step up my drinking to a reasonable amount when I might win the Prize myself; who knows?”

There were times, for sure, when he had had too many. It was 1948, on the heels of tumultuous 1947, and the married Hemingway had become smitten with a teenage countess and model for Renata in “Across the River,” while hunting in Italy. She came to Cuba at his invitation. His physician Dr. Herrera Sotolongo remembered that he started drinking and became useless for writing. “If you keep it up,” the doctor told him, “you won’t even be able to write your name.”

Was he an alky? The friends he had in Cuba, his main residence for 22 years, may have a more lenient definition of drinking than gringos. They say that Hemingway was a drinker, alright, but there were others who drank more. “For those of us who were accustomed to the life of the drinking man in Spain or France, where men drink, Hemingway was not an extraordinary drinker,” stated Dr. Herrera. ”Any person in those countries drank more than he did.”

A surprising practice of self-control entered in Hemingway’s boozing. He made a point of having his mixed drinks, like the daiquiri, served without sugar added. One reason Hemingway laid off sweet drinks was that they were harder to down in quantity. “I you drank that many with sugar it would make you sick,” he said. He also became something of a sugarphobe because his father had been diabetic and he sought to avoid that condition.

In an intriguing doctoral thesis about the role of alcohol in the author’s canon, Ashley Yarbrough Oliphant writes, “If nothing else, his fiction provides the audience with an education of international wines and spirits.” Campari, Perrier water, and Chianti – these once exotic libations are commonplace now, and we can largely thank Hemingway for that. Golden Jeep Beer, mentioned in the journal of his last African safari, didn’t become a household name, but hey, you can’t win ‘em all.

I shall leave you with something cool for the dog days, this recipe for the Papa Doble daiquiri (no sugar added).

Fill a blender one quarter full of ice, preferably broken into smaller pieces. Add the rum, lime juice, grapefruit juice and cherry brandy. Blend on high until the mixture turns slushy and light yellow-green colored. Serve in a large martini glass. Or drink straight from the pitcher. According to Hemingway’s confidante and physician, the great man would at times drink straight from the bottle. Enjoy!

Grady Miller is the author of “Lighten Up Now: The Grady Diet,” available on Amazon. He can be reached at grady.miller@canyon-news.com.

A “Virtual Concert Series” Will Be Held By Golden Gate Park...