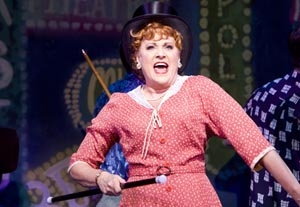 SAN FRANCISCO—”Irving Berlin’s White Christmas” is playing at San Francisco’s Golden Gate Theatre until Christmas Eve, with Lorna Luft, the daughter of Judy Garland. The actress will reprise her role as Martha Watson. Luft starred in the musical 11 years ago including a United Kingdom tour from 2006 to 2011.

Producer Nancy Gabriel shared that she was excited for Luft to join the cast of this tour, and that she is “a consummate performer with an extraordinary history in the theatre.”

“You cannot get more of an American feeling show at Christmas than this show,” Luft told ABC 7. “This was written by a man who loved our country and this story is about home.”

The song “White Christmas” was written by Berlin in 1942. The stage musical premiered in St. Louis in 2000, followed by San Francisco in 2004. It was inspired by the 1954 movie starring Bing Crosby, Rosemary Clooney, Danny Kaye, and Vera-Ellen, where two WWII veterans return to Vermont from Europe and discover they have become famous in several entertainment outlets. They fall in love with a pair of sisters and perform at the Vermont Inn, which is run by their former commanding officer.

This year’s San Francisco showings are part of a National Tour which commenced in November in Bloomington, Indiana and will end in Sacramento, California.