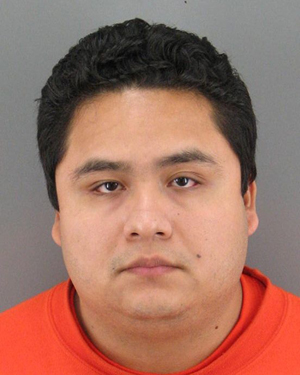 The San Francisco Police Department’s blog reports that the arrest of Jose Olmedo of San Francisco preceded an incident in which the suspect approached individuals standing outside of a business on the 2300 block of Harrison Street.  He proceeded to produce a handgun and ordered them to empty their pockets.  The victims quickly complied and dropped cell phones and wallets to the ground.  During the crime, one victim was able to slip away and alerted an employee of the robbery, who then called police.  Not long after, a fifth victim left the business and was confronted by Olmedo who proceeded to demand his wallet.  Once the victim told Olmedo he had no wallet, the robber fled the scene.

Officers from the Mission Police Station and the Violence Reduction Team arrived to 19th Street and Folsom around 1:15am, the area where Olmedo was reported to have been seen.  After being directed by bystanders to Treat Street, officers came to Mistral Street where they spotted Olmedo hiding behind parked cars.

Once he was detected, Olmedo raised his hands towards the sky with his gun in his hand.  After being ordered twice to drop his gun, Olmedo complied and was taken into custody.  The weapon in Olmedo’s possession was an Intratec .22 caliber handgun, which was unloaded.  Several items that Olmedo stole from his victims was also recovered from his pockets.

The victim’s calm demeanors and the quick response of the Mission Station and Violence Reduction Team were credited with Olmedo’s speedy apprehension according to SFPD Chief Greg Suhr.  He also added police staffing in the Mission District was increased several weeks ago due to recent gang activity and violent crimes.

Stitch Fix To Lay Off 1,400 Of Its California Employees

“If Loving You Is Wrong” Recap: ‘Taken’