UNITED STATES—After spending some quality time behind the wheel of the new 2015 Mercedes-Benz GLA250 4Matic, two things have become very clear: 1) The days of drastically over-engineered compact luxury sedans have come and gone, 2) Safety features, overall utility, reliability, and cost of ownership are now at the top of consumers’ lists of priorities when choosing a vehicle, no mater the segment. While it may be difficult to assess long-term attributes like reliability over the course of a week, there is much that can be said regarding the GLA’s ability to satisfy the other three criteria. Furthermore, it is clear that Mercedes-Benz has catered to the idea that the less complex a vehicle is, the less there is to go wrong with it.

For example, in the past, Mercedes-Benz practiced a policy of introducing new innovations and technology on their entry-level models first, then gradually graduating those features up to their mid-size and full-size offerings. This trickle up affect saw features such as articulating wipers, five-link rear suspensions, and “PC like” infotainment systems make their appearances in various baby Benz offerings before an S-Class owner ever experienced them.

Today, it is a different story. The latest Benz innovations such as Magic Body Control & Magic Vision Control are reserved exclusively for S-Class drivers & passengers. CLA and GLA owners will make due with more conventional vehicles, possibly hoping that the high-end features will trickle down at some point through the classes. But it is more likely that these “Magic” features don’t interest consumers eyeing the current GLA250. While magicians can be fun at a child’s birthday party, they simply aren’t practical on a daily basis. Safety features, however, are very important.

The GLA has a very impressive list of standard and optional safety features. But are they just acronyms on the window sticker, or do they actually keep you safe? Within a few miles, the Mercedes-Benz blind spot warning system earned its keep. It isn’t necessarily a common occurrence for another driver to cut across six lanes of traffic to exit the interstate at the last minute just as I am entering, but thanks to the warning tones from Blind Spot Assist, I was able to prevent this careless driver from causing a bad accident.

Furthermore, the GLA is one of two cars in its class to offer a frontal collision prevention system. The GLA is the only one to offer it as standard. While the autonomous driving car is still in its early stages of development, collision prevention systems based on radar guidance or stereoscopic cameras are where it all starts. It is no coincidence that we are now seeing an explosion of active safety features in the automotive industry now that there are a multitude of non-driving related distractions vying for a driver’s attention.

Unfortunately, all the active and passive safety features in the world can’t prevent a newly licensed driver in his mother’s minivan from running into a parked GLA while performing a hurried three-point turn in a brash attempt to make it home before the clock strikes 11 p.m. Until a car company figures out how to prevent that from happening, this journalist, for one, will be anxious with anticipation. Perhaps this accident could have been avoided if this inexperienced driver had been driving a Mercedes-Benz GLA.

On pavement, the GLA is a spirited performer. What the 2-liter direct-injection turbo power plant lacks in high rpm horsepower, it more than makes up for in low and mid-range torque. The 7-speed dual clutch automatic transmission is a perfect accomplice that keeps the engine in the sweet spot during brisk romps through twisting canyon roads. Switch it into Eco mode, and it will keep the revs low and provide a more relaxing drive. Mercedes-Benz has always been about effortless acceleration and the GLA has not strayed from that concept.

Off road, the GLA may surprise you. While it may lack the ground clearance needed for serious off road adventures, the updated 4Matic all-wheel-drive (now capable of apportioning torque up to 100 percent front or rear) can handle the usual scenarios most consumers will throw at it. Whether it is a trip to the ski lodge, extracting a small vessel from a boat ramp, or a day at the county fair, the GLA will perform without a hint of drama. 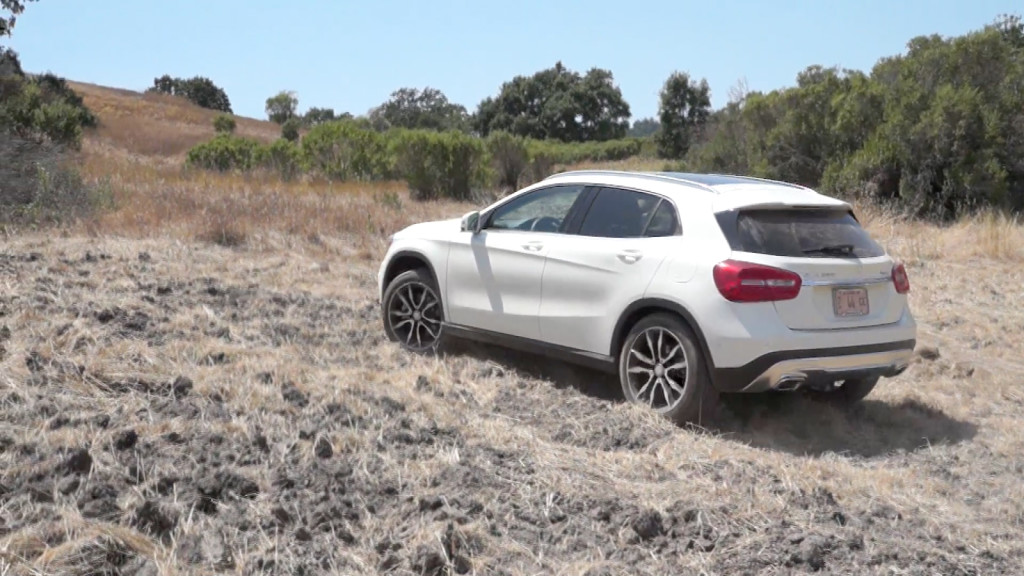 So what are the cons? Well, this is a review so don’t expect it to be all sunshine and daisies. The first thing noticeably missing from the GLA was an automatic climate control system. Every competitor offers a dual zone automatic climate control system as standard equipment. In the Benz, dual zone automatic climate control comes with the optional $2,300 premium package. It is unavailable as a stand-alone option. Our tester’s manual climate control unit may not have been such an annoyance had it not been possessed by an electronic gremlin. On occasion the fan speed would drastically change for no apparent reason. The second mentionable gripe involves interior materials. While there wasn’t quite as much hard plastic in the GLA’s cabin as one would find in a Beverly Hills plastic surgeon’s office, there was too much for a vehicle in this segment. Yes, this is a compact car, but it is still considered a member of the premium class.

Nitpicks aside, the question remains, “Has Mercedes-Benz learned how to build a competitive compact car?” We will not know for sure until the GLA has had some market exposure, but the formula looks promising. Eliminate complicated gadgetry, throw in a game-changing safety feature as standard gear, and offer it all at a lower entry price than the competition. It will be interesting to see how said competitors respond. The ball is in their court.