UNITED STATES—The U.S. Capitol building in Washington D.C. is on lockdown after an active bomb threat was received at approximately 10:30 a.m. on Thursday, August 19. U.S. Capitol Police (USCP) discovered a suspicious vehicle located outside the Library of Congress. According to reports, explosives may be inside.

USPC reported this is an “Active bomb threat investigation,” and The Federal Bureau of Investigations (FBS), The Bureau of Alcohol Tobacco and Firearms (ATF), USCP, and a negotiator are responding. 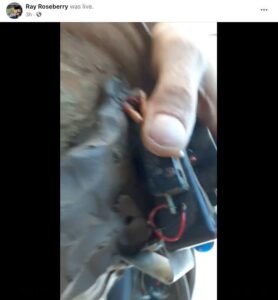 According to reports, the suspect has been identified as Floyd Ray Roseberry, 49, from Cleveland County, North Carolina who was live on Twitter and Facebook video feed.

“It’s on you, Joe [Biden]. I’m ready to die for the cause, and brother if you say to me you’d do anything to save one life, one life, you said you’d do it. Well, you gotta chance. I want to go home. I want to go home and see my wife. We’re living in a free country, Joe. The choice is yours. If you want to shoot me and take the chance of blowing up two and a half city blocks because that toolbox is full. Full of nitrate. It’s full. I don’t want to die, Joe. I want to go home. Just like the people of Afghanistan want to go home. Them people’s lives are on your hands. All them, dead people’s lives are on your hands. Afghanistan, I’m standing for you strong too. The Mother***ffers should have bombed their a…es and made sure you were alright before they left,” Roseberry stated while inside his vehicle.

This appears to be the livestream of the man who is sitting in the pickup truck near the US Capitol https://t.co/sNKdRHRQSU pic.twitter.com/fywOoRkuWI

Nearby businesses are being told to shelter in place.