UNITED STATES — On Thursday, August 20, Delta banned the former Navy SEAL who allegedly killed Osama Bin Laden during the 2011 raid after he tweeted a picture where he was not wearing a face covering on board of one of their flights.

On Wednesday, Robert O’Neill tweeted a picture of himself without a mask and with the caption “I’m not a pu**” in a Delta plane. The photo was picked up by the media, drawing attention and criticism to him. On Thursday, O’Neil announced that he could no longer fly with Delta due to the picture. 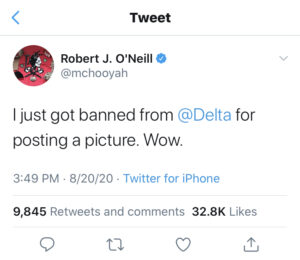 Delta confirmed the ban in a statement where they said that every passenger had to comply with their travel policies. According to AP News, the airline has banned more than 100 passengers for not wearing a face covering in their flights.

“Part of every customer’s commitment prior to traveling on Delta is the requirement to acknowledge our updated travel policies, which includes wearing a mask. Failure to comply with our mask-wearing mandate can result in the ability to fly Delta in the future,” read the statement from Delta.

O’Neil claims that the picture was a joke and that he had a mask on his lap when he was taking it. The tweet with the picture has been deleted from his account and he said his wife did that.

In an interview with Fox News, the ex-Navy SEAL said that he was following Delta’s policies of having the mask off while eating or drinking and claims that this is what he was doing when he took the picture. During the interview, O’Neil also said that it was the New York Times who put pressure on Delta to ban him when he posted the selfie as a “peaceful protest” to his Twitter followers. He said he did not want to hurt anybody.

“I’m not anti-mask. I don’t think it should be ordered to but if people are more comfortable, go ahead and wear it. But to me this is a peaceful protest of wearing a mask,” O’Neil said during the interview.