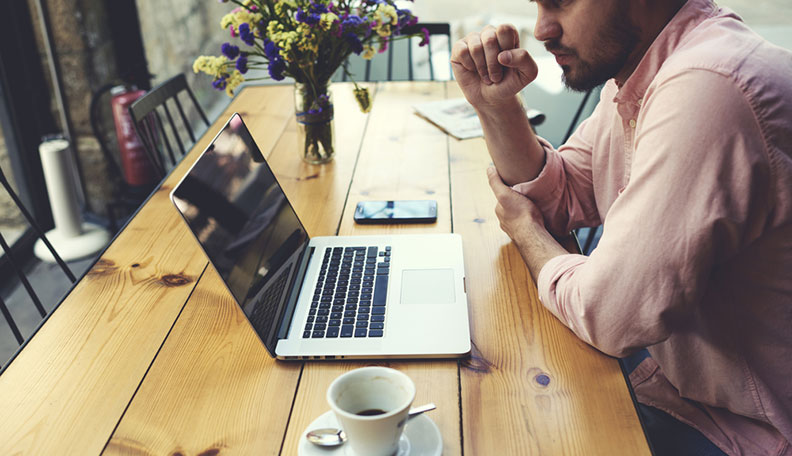 UNITED STATES—Recently while experiencing some trust issues with my boyfriend where it got rather heated with quite a bit of emotion. He denied doing something that I was pretty sure he had done. However, we are not married and if he chooses to do what he did and lie about it, it’s his life not mine.

We lost track of time whilst in a heated discussion and so he had to leave quickly because he was late for his flight. He left his laptop behind, opened up onto his email and Facebook page. I noticed it a few minutes after he left but I was so mad at him for being a jerk I didn’t rush out after him.

An hour later, the housekeeper came in and said, “Your guy is on the phone to see if he left his laptop, is it here?” She had known of our disagreement as she was doing her share of snooping in and out. I could tell she was more siding with me from all her expressions and sighs.

I nodded that it’s here… and as we both glanced at it together, I knew what was coming next….she gave me with the all so familiar wink wink nudge nudge look…

After she disconnected the call, she said with massive excitement as if I had just won the lottery, “Go on, look to see.”

Well first of all I don’t like peer pressure, especially when I have my mind made up. But more importantly, I have a strict boundary against any type of snooping, even if the person gives you permission which was not the case in this situation….but still… I can’t do it.

I guess this personal boundary dates back to when I was just a wee child. I’d see my mother sneaking money from my dad’s pockets. She’d put her finger over her lips to say “Shhhhhh,” I never quite understood that because I knew my dad gave her whatever she wanted. She wrote checks, she had credit cards, and he always made sure she had cash for spending money, so why did she go into his pockets and deceitfully take money?

I often asked her about it and she said there is a thrill into taking it without him knowing. Me, even as a child thought, that is borderline stealing… A CRIME! It’s confusing for the person that unsuspectedly reaches into his pocket to pay for his lunch to find his money is missing and wondering if they lost the money you stole or if someone on the house staff is a thief or what?

Around that same time of my life… my aunts and uncles on my mother’s side who had an obvious ongoing curiosity turned jealousy about my father’s success, constantly quizzing him on his business tactics. It was so hard for them to believe how an Irish immigrant coming to America with $35 and not asking or taking handouts could possibly turn into such a success so quickly.

It was typical to hear comments from them that my father was an undercover spy for the IRA (Irish Republican Army). Of course, I never believed them until one day my mother asked me to go get something out of my parents’ dresser drawer and I found a gun wrapped in a type of thin cloth, like you see in the movies! Scared to death I ran to my brother and let him know. He said he knew already and I made the assumption that my aunts and uncles were right. My dad was a spy. My brother, with his dry sense of humor and his love of pranking me, thought it was funny for me to believe it. And he encouraged the notion that yes, our dad is a spy!

I went on to believe this for many years until I started working for my dad then I realized I had answers to all the questions and my dad was the most honest straight up guy who never even lied on his taxes…and that silly assumption from having my childish hands in his private dresser was so damaging. You can’t unthink things.

So somewhere around these early childhood experiences I developed an intense dislike for having my hands in other people’s private spaces. Whether it was my mum telling me to go get money out of her purse and me coming back with her purse to do it herself or a co-worker asking me to get something out of their personal desk or my friend asking me to retrieve something from her laptop or book bag or anything. I just don’t go in other people’s things.

Many didn’t like this unwavering boundary I had set for myself. I dealt with constant criticism as it slowed things down from time to time. “Can’t you just get $5 out of my wallet please, we are going to be late?” I would say NO, I can’t. They didn’t get it. I didn’t get it… until now!

I keep a modest size purse with lip gloss, chapstick, cards and money then my iPhone. I don’t like anyone putting their hands in my purse. I don’t like anyone going on my computer or in my desk. My computer is completely G-Rated and I have nothing to hide on it I just don’t like the idea of someone seeing something, rushing to a judgement and then believing that like it happened at least once.

At work we share computers via a program that lets you remotely access computers. One night I was alone in the office and my co-worker working late at the other office needed my guidance on how to do research so I showed her then let her work off my computer remotely. Another co-worker came in as I stepped away to get food and he plopped down on my desk and without asking started using my computer…and when I came back he said with a guilty grin “By the way I closed all the windows and deleted your browser history. I said well okay thanks and didn’t think much of it… other than, “Wow that’s odd.”

Months later at an event, I saw him. Excitedly he told me how he scored some Molly and wanted to know if I wanted some. I said “no! I don’t do drugs…embarrassed and probably scared he’s going to lose his job… he said, “Oh I’m sorry, I thought you did.” I found it to be a peculiar assumption because just about everyone knows I’m as goodie two shoes as you come….  but I didn’t think more of it.

Later another co-worker told me that he had told them I was looking to buy drugs online. Why on earth would I be doing that? Sheesh, then I remembered back to this person jumping on my computer, using it without my permission and I remember the assignment that was being done that same day…. It was only after that… months later… where I pieced all the weird comments together.

So when you snoop… it gives you details without guidance… your mind wanders and reaches conclusions when it shouldn’t and it never helps anyone to jump to conclusions…it tarnishes trust, makes your imagination go mad and it just is a boundary people should create and respect.

Now back to my distrusted boyfriend who left his laptop open to his Facebook, his yahoo page etc… the last thing I’m going to do is cross that boundary. I already think he is lying to me about something he swears he didn’t do…. So now what if a pretty cousin named Tiffany that I never met Facebooked him. I would forever think; okay why didn’t he mention this Tiffany before…. Who is this person… he’s cheating with her? And since I shouldn’t be on his computer to begin with, how can I ask for more details on her.

Also I already feel he is lying to me about something else, and we’re not married, so why in the world would I invest more emotion, time, possible heart ache into this relationship by seeing his private emails. If you can’t trust the person you are in a relationship with…GET OUT! Don’t dig into an area that will give you more reason to care, to get mad, to get sad, to get happy… Just get out! Trust is built between two people mutually…its not found secretly snooping through email.