Adam Abdul-Jabbar, 28, the youngest son of former professional basketball player Kareem Abdul-Jabbar, was suspected of being involved in an assault with a deadly weapon for a stabbing incident. As the inmate information on the Orange County Sheriff’s Department website notes, Adam was born in 1991, and he is 6’07” tall and 180 lbs.

According to the police, around 10 p.m., on Tuesday, June 9, they responded to a call about a stabbing in the San Clemente neighborhood. The arrest of Adam Abdul-Jabbar was made by the San Clemente Police Department, on Wednesday, June 10. Adam was released from custody on the same day, at 3p.m. The release type is “Bond Posted”.

TMZ Sports indicated that a police spokesperson told them, the suspect was arrested without incident when the police found him. And the victim was able to transport himself to the hospital “with multiple non-life-threatening injuries”.

Kareem Abdul-Jabbar, is an American former National Basketball Association (NBA) player, known for his “skyhook”. Amid his 20 seasons in NBA, he played for the Milwaukee Bucks and Los Angeles Lakers, serving as a center. During his career, he won a total of six NBA championships with his teammates. Before he started playing in NBA, he played for the basketball team at the University of California, Los Angeles (UCLA). He became a writer and actor after he retired from the basketball team. Kareem was cast in Bruce Lee’s film The Game of Death in 1972. Adam, the suspect of the stabbing case, is his fifth child. In 2017, Adam appeared on “Celebrity Family Feud” with Kareem Abdul-Jabbar. 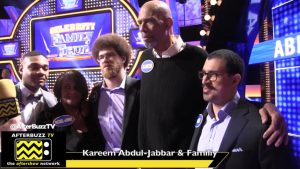 The victim has not been identified yet. The investigation into the stabbing is ongoing.

Lil Yase Killed In Shooting Over The Weekend