SAN FRANCISCO—Officer Carlos Manfredi of the SFPD told the San Francisco News that a man was spotted trying to assemble a shotgun on the corner of Octavia and Bush Streets on Sunday, June 21 at 11:30 p.m. The suspect in question Joshua Boiling, 23, a transient, got into a struggle with the first two officers who approached the scene. The man became aggressively confrontational and resisted arrest, causing multiple units to respond to the scene to assist.

The suspect was holding onto one officer by the hands and arms and proceeded to throw the other officer against the wall with his waist. It took multiple officers to separate the suspect from the officer, at which point the suspect struck another officer in the face, causing him to fall unconscious. 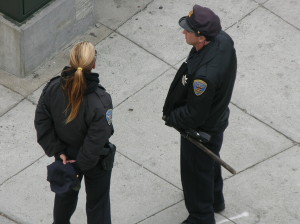 Officer Carlos Manfredi reported that the officer who was hit was treated at Saint Francis Memorial Hospital in downtown San Francisco for a concussion and was released shortly after. The other officers only suffered minor injuries.

Boiling refused to receive any medical attention on scene and was brought to San Francisco General Hospital for further evaluation. Boiling was arrested on five accounts pertaining to resisting arrest, assaulting a police officer, and battery.

The shotgun was brought in for evidence.