UNITED STATES−President Trump announced during a virtual Town Hall on Tuesday, March 24, that he wants the country back to work by by Easter, which is Sunday, April 12.

Hemmer paraphrased that President Trump stated that he would like for the country to get back to work by Easter. He  reminded the Commander in Chief that he said “the first order of business was to kill the virus.” He was later  asked how he thought then that they could get back to normal 19 days from now. 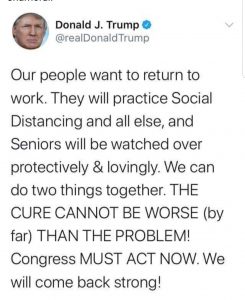 President Trump defended his words stating, “America needs to get back to work.” The President acknowledged that yes, people would have to wash their hands five times more often than before, not shake hands, and practice social distancing.

“Our Country wasn’t built to shut down. Our people are full of vim and vigor and energy. They don’t want to be locked into a house or apartment or some space….”

Hemmer questioned Birx if this was possible, who explained that there were counties that have not reported even one case and that their job was to make sure that they never had one case reported.

President Trump mentioned putting the country back to work the day prior on March 23 at a Corona Taskforce briefing. According to reports,  the reason for the rise in the stock market was news of a potential agreement between members of Congress to pass a $2 trillion stimulus package to help Americans and businesses.

The exchange-traded fund that tracks the DOW is up just over 5 percent, while the DOW Industrial Average closed at 582 points or 3.1 percent on Monday. On March 24, Market Followers posted, “Super Green Tuesday, Dow Up 11 percent.”