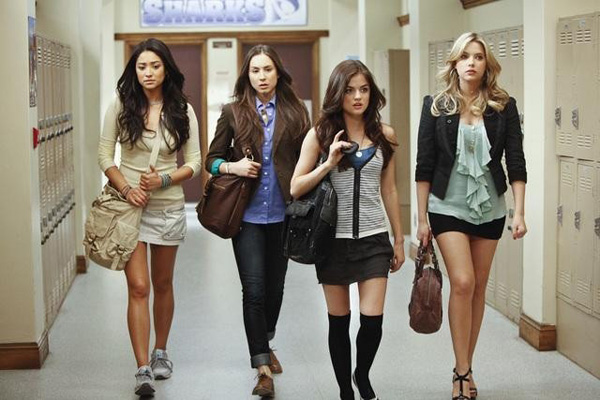 HOLLYWOOD—It was the moment that “Pretty Little Liars” fans had been eagerly awaiting and Tuesday’s episode did not disappoint!  To say that ‘Misery Loves Company’ was a jam-packed episode filled with surprises would be an understatement.  It was so thrilling I’ll be watching a second time to ensure I didn’t miss any important tips as to what other members are apart of the “A” team.

The episode opened with Spencer (Troian Bellisario), Emily (Shay Mitchell) and Hanna (Ashley Benson) caring for a sick Aria (Lucy Hale).  They speculated whether Aria’s father may have hurt Alison, as Toby (Keegan Allen) and Mona (Janel Parrish) plotted their next move, but Mona unleashed a new clue indicating that “she is calling the shots.”  Meaning the duo are taking orders from a higher authority.  Start guessing as from whom? Melissa, Alison, Ella, Ashley, Mrs. Hastings or Mrs. Fields; it’s someone with power.

Caleb (Tyler Blackburn) appears to be holding a secret from Hanna, as the couple bickered about ways to handle nemesis, Mona. Spencer and Toby made plans for their anniversary as she loathed having to attend a dinner party with her family.  A worried Meredith searched the house for something “those diary pages” as a sick Aria lay sleeping.  Hanna begged Emily to spy on Caleb to see what he’s up to.  Meredith lied to Ella (Holly Marie Combs) about her daughter’s condition. That woman is devious, she even stole Aria’s phone!

Spencer spots a crucial piece of evidence about Radley Sanitarium as she prepared dinner for Toby. Just who was that woman dressed in red staring at Hanna as she prepared for her interview, could Alison really be alive? The more that I think about it, it could indeed be possible.  Hanna realized she was in trouble when her supposed interview led her to be attacked by someone dressed in a black hoodie amidst a room of mannequins. They left a gift for her which turned out to be a key, with the initial “A” on it. Surprise, surprise Caleb was meeting with Paige to discuss ways to protect the ones that they love, by attempting to find Mona’s trophy room.  They are messing with the wrong sociopath.

Aria received a “visit” from Alison who stole a doll that Aria had hidden in her bedroom.  “Everywhere I turn,” stated Alison to Aria about seeing “A.”  Alison admitted that she needed that money and warned Aria not to drink that tea, indicating that Meredith is looking for those diary pages also.  One last cryptic note “You know why I picked you right,” stated Alison before disappearing. Just what did she mean by that line?  Aria awoke to find herself trapped inside her bedroom. These visions of Alison which each liar has now encountered are the most tantalizing twists of the series.  Is she dead, alive or providing clues that the girls already know?  Hanna and Emily spotted a distraught Meredith searching for medication which prompted the duo to stop by Aria’s house. Our fierce little liar (Aria) guarded herself with a shard of glass.

Toby surprised Spencer with flowers, just as he spotted the key with the initial “A;” Spencer created a cover indicating that it’s for a storage unit that Melissa has inPhiladelphia. Meredith became obsessed with finding those pages from Aria threatening physical harm, which prompted Aria to run for help, not before being knocked out be her assailant. Hanna and Emily showed up at Aria’s place to find themselves confronted by a weird acting Meredith who locked the girls in the basement. The liars speculated just what Meredith and Byron were conspiring, as the ladies armed themselves with weapons.  A flashback revealed Bryon refusing to pay off Alison, as Melissa exited the house.  Whose house is not quite known, but she was talking to someone on the phone about calling 911. Oh, Melissa you have always been rumored to be apart of the “A” team, just what secret you’re keeping is the mystery fans want to know.

Toby broke into Spencer’s house searching for the “A” key as she caught him red-handed; she knows he is apart of the “A” team! A furious Spencer slapped Toby and figured his identity after noticing the ID in his apartment.  It was a heartbreaking moment to watch her heart shattered into pieces.

Bryon admitted to his daughter that he was afraid of confessing the truth, and she gave him the pages of Ali’s diary.  A crazed Meredith is on the loose, which must have Bryon and the liars on edge.  She does not believe her father is telling the truth, but he insisted on telling the truth to the police, but not before she burned the pages of the diary. That may have been a big mistake! Spencer chose to confront Toby face-to-face who gave her the cold shoulder; it was later revealed to be Mona enjoying the dinner that Spencer had planned.  It was troubling to watch her cry her tears out, as Mona relished in the heartbreak.   Now that Spencer knows the truth, it’s just a matter of time before the rest of the “A” team begins to unravel.  Until next week “PLL” fanatics!