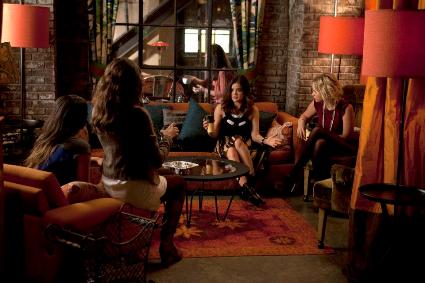 HOLLYWOOD—It seems like eons since we last talked about the ABC Family guilty pleasure “Pretty Little Liars,” but after months of being on break the show returned with a bang on Tuesday with its winter premiere. The episode amply titled “She’s Better Now” paid a huge focus to “A” herself, Mona (Janel Parrish), who has since been released from Radley Sanitarium.

The audience is well aware that Mona is still up to her old antics alongside “A” team member Toby (Keegan Allen). That’s right, Spencer’s ‘boyfriend’ has been plotting against her all along and she has no clue! Yes, the smartest liar of them all is getting played big time, but she’ll find out this season. It’s just a question of what she’ll do when she finds out that has everyone concerned.

The episode opened with someone dressed in a black hoodie skateboarding through town. We are lead to believe it’s Toby, but no face was seen. Someone in a vehicle hot on their trail attempts to run them off the road and it’s revealed to be Toby.  Just who was he trying to run down is the question? Mona begged Hanna (Ashley Benson) for assistance with her transition back to school, scaring her half to death in the middle of the night. Spencer (Troian Bellisario) and Aria (Lucy Hale) discussed the opportunity to befriend Mona to get information about the “A” team, while Aria was super defensive of the issue that her father may have played a role in Alison’s death.

I felt so much compassion for Mona as she made her transition back to school.  Yes, she’s done some terrible things, but didn’t the liars deserve it? To see someone place a brain with a knife in it inside her locker was horrid, while everyone used their phones to capture it.  It appears Jason (Drew Van Acker) and Lucas (Brendon Robinson) were watching her every move, just as Mona whispered something to Lucas, which peaked Hanna’s interest.  He just walked away.  “Welcome to Mona 2.0,” shouted a sarcastic Spencer.  Best line of the night so far.  Aria’s worst enemy, Meredith, became her teacher.  Looks like an opening for Mona to become Aria’s friend by taking care of Meredith, the wicked witch from the east. Hanna and Caleb (Tyler Blackburn) speculated who Aria stabbed with the screwdriver on the haunted train, and Emily was stunned to see the gentleman from the Lost Woods Resort working as a janitor at the high school.

Jason comforted Mona, which fueled rage inside Spencer, creating sparks in her relationship with Toby. Hanna and Emily (Shay Mitchell) spied on the janitor and found some of Mona’s things. “A” left a threatening gift for Aria about Ezra (Ian Harding) being a daddy.  She’s in over her head.  Hanna gave up a weird clue regarding Caleb not knowing his father as she pressured Aria to reveal the truth.  Someone spied on Spencer and Toby in the hot tub, which unnerved Toby.  Aria attempted to pry information from her father about Alison, which caught him off guard; it was obvious he was lying.

Mona sent out a cyber video telling her story about being bullied, which caught Hanna’s attention, but Lucas stopped by to deliver money to Caleb.  He revealed that he had an accident while skateboarding, which indicated Toby tried to run him over. He did reveal that Mona had been sneaking out for quite some time; the friends were sweet on each other for a few seconds. Her campaign video really worked as everyone began to befriend her as the gang prepared for the marathon walk.

Emily, who was held “captive” at home, disarmed the house alarm so she could catch some fresh air, and ran into the other girls as they broke into the janitor’s room and all of Mona’s things were MIA.  The liars discovered Ali’s diary, and discovered things about Bryon (Chad Lowe).  A flashback revealed Alison blackmailing Bryon, threatening to reveal his affair and he got quite physical with her as she demanded money.  The liars were caught red-handed by the janitor and Toby.  Mona locked eyes with Meredith, plotting something sinister that injured Meredith. Score 1 for Aria.

A very defensive Bryon grilled Aria about whether her friends implemented the stunt that injured Meredith and then called him out on his secrets.  The episode wrapped with Spencer paying Jason a visit and getting a call from Aria indicating that “A” set them up; while Bryon eavesdropped on his daughter.  Jason had a nifty scar that Mona helped heal.  Someone in a black hoodie was seen toying with someone’s bike, which led to a tragic fall. “Pretty Little Liars” airs Tuesdays at 8 p.m. on ABC Family.  The twists and turns have just begun. Until next week “PLL” fanatics!