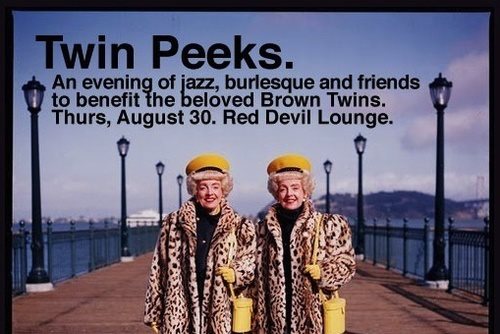 SAN FRANCISCO—It was announced that last Wednesday, January 9, Vivian Brown, one half of the famous twin duo with sister Marian Brown, passed away in her sleep.

The Brown twins have been an iconic staple in San Francisco over the years for their appearances in the public and media. Wearing the exact same flashy clothes, make up, and hairstyle, the two were seen together 24/7. The two even walk and ate in sync with one another, upholding their reputation as spitting images of each other while never breaking character.

The twins were regulars at Uncle Vito’s Restaurant

Born in 1927 in Kalamazoo, Michigan, the twins later moved to California in the 1970s where they worked as secretaries and soon appeared on multiple advertisements and talk shows. Their commercial acting began with a Reebok commercial in 1988, and later companies that followed included Apple, AT&T, Dell Computer, IBM, and more.

In 2012, Vivian was diagnosed with Alzheimer’s. Friends and fans formed several charities in effort to raise money for the twins due to expensive hospital costs. Vivian died Wednesday night, and there has been little comment on her sister’s behalf since.

A note to Marion posted on Uncle Vito’s Facebook page states, “So many people have sent money and kind wishes for Marion and Vivian Brown!  This anonymous note accompanied yet another generous donation.”