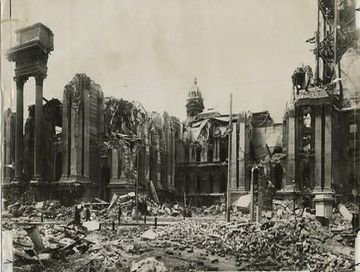 SAN FRANCISCO—It was announced on Monday, September 24 that a construction crew working on a building project in San Francisco’s Civic Center unearthed the foundation of the old City Hall that was destroyed in the 1906 earthquake.

Workers were digging underneath a Hyde Street sidewalk as bricks, concrete and steel reinforcing bars were uncovered on September 14. Archaeologists from the federal General Services Administration came to the site and determined the remains were of the old City Hall by referring to old maps and reports.

The building opened in 1987 after 25 years of construction and was constructed in a dome that was 300-feet-tall. The municipal building was the largest of its kind west of Chicago and believed to be earthquake proof. However, the building was proven to be anything but when it became damaged only a year after form a minor tremble.

After the 1906 earthquake, it took mere seconds for the building to collapse. The wreckage became symbolic of the disaster that struck the city and photos were even used as postcards. What remained of the building was destroyed in 1909.

Secretary of Labor and Commerce Victor H. Metcalf described the wreckage in a letter sent to President Theodore Roosevelt on April 26, 1906.

“As regards industrial and commercial losses, the conditions are appalling,” he wrote. “Practically every municipal building is destroyed, forcing the city officials into scanty quarters […] three hundred thousand people were rendered homeless, and their ordinary methods of providing themselves with food, clothing and shelter being entirely destroyed.”

The current San Francisco City Hall was opened nine years later in 1915.Architects and historians plan to document the new discovery and then proceed to burying it once again in order to continue the landscaping project.