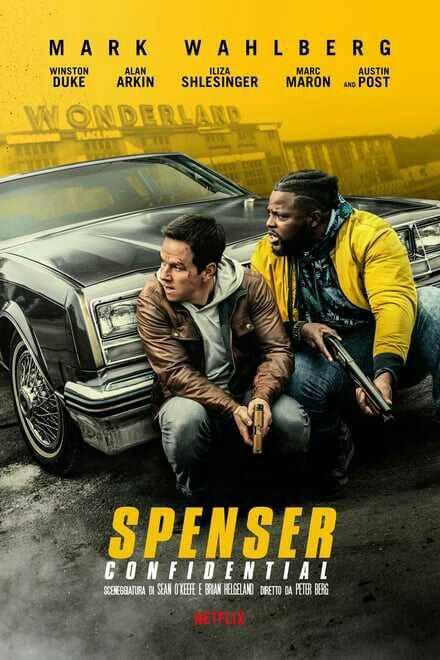 HOLLYWOOD─I heard plenty of buzz about this action-thriller starring Mark Wahlberg that was on Netflix. I hadn’t thought much of it, but with a bit of spare time on my hands I gave the flick “Spenser Confidential” a viewing, and dare I saw I was quite surprised. Look, I wouldn’t tout my film expertise, but I have to say, I know quite a bit about cinema people. I’ve always been a proponent that if a movie goes directly to video or what we call streaming nowadays, that is never a good sign, but it seems the quality is changing.

How would I describe “Spenser Confidential?” It is a movie full of action, great comedy and a mystery that really keeps the narrative in play to hold the viewer’s interest. As noted earlier, the film stars Wahlberg as a fallen officer, and when I say that he’s disgraced. He brutally assaulted a high-ranking authority figure, and as a result he found himself serving 5 years in prison.

Upon getting out of prison, Spenser does his best to acclimate himself back to his norm, without having the badge that he was so accustomed to. He’s an ex-convict, but it is clear that Wahlberg portrays a character that is not against his type, but at the same time is actually against his type. He’s tough, he’s hilarious (in a way that I never expected), and the character is quite rootable to say the least. At first, I felt this movie was more a buddy cop flick, but it soon becomes apparent this is much more going on.

“Spenser Confidential” teeters carefully between comedy, drama and thriller. Dare I call it a dramedy-thrill? I mean it’s a new piece of terminology, but because this movie is so unique I find it fitting and so entertaining. Wahlberg is a smart-ass who knows how to balance wit with seriousness at moments where we know the laughs have shifted to a new direction. There are also strong supporting roles by Alan Arkin, Winston Duke and Illiza Shlesinger. Arkin does what he does best as a veteran actor, who is able to steal a scene with a look or quick-witted dialogue.

Duke who many know from his work on “Black Panther” and the thriller “Us,” is a brooding presence, but he definitely is the scene stealer in this flick if you ask me, as well as Shlesinger as Cissy, Spenser’s ex, who is a hothead and has a level of sarcasm that is catchy and potent for this movie. The chemistry between these characters works exceptionally and that may be a direct result of the collaboration of Wahlberg and director Peter Berg who have aligned on multiple occasions.

What really hooks the audience with this movie is the mystery of what Spenser is truly trying to unearth. The audience doesn’t learn at first why he beat Captain Boylan (Michael Gaston) to a pulp at the start of the movie. The audience learns more as the plot plays out and all is not as it seems and the twists and turns are a bit surprising. Not everyone is who they appear to be and those who the audience thinks they can trust have far sinister things at play.

“Spenser Confidential” has it all for the audience: great and layered characters, a fun narrative and a mystery that slowly unfolds at a point that helps the spectator attempt to solve the pieces of the puzzle before the big reveal takes place. It may have premiered on Netflix, but this is a movie that I truly wished made its way to the big screen because it is very entertaining to say the least.