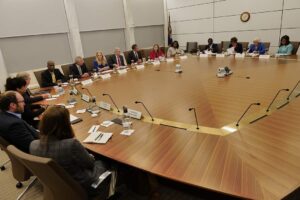 The second part of the 90-day chart begins at 3.41 percent with the last day not yet reported.

Reports indicate that the Federal Reserve expects another interest rate hike in the month of December.

The Chairman of the Federal Reserve, Jerome “Jay” Powell held a press conference where he stated:

“Here in the United States, we have a stronger economy. We have an economy where inflation is running at 5 percent at core PCE [Personal Consumption Expenditures], which is a really good indicator of what’s going on for us the way we see it [The Interest Rate] at 5.1 percent if a 12-month basis. So, we know we need to use our tools to get inflation under control.”

“Recent indicators point to modest growth in spending and production. Job gains have been robust in recent months, and the unemployment rate has remained low. Inflation remains elevated, reflecting supply and demand imbalances related to the pandemic, higher food and energy prices, and broader price pressures,” reads a statement from the Federal Reserve website.

The statement from the reserve attributes to the rise of inflation to be partially due to Russia’s war on Ukraine. According to the Federal Reserve, that war is causing a “tremendous human and economic hardship,” and it’s “weighing on global economic activity.”

In addition, the Federal Open Market Committee (FOMC) made the following remarks:

“The Committee seeks to achieve maximum employment and inflation at the rate of 2 percent over the longer run. In support of these goals, the Committee decided to raise the target range for the federal funds rate to 3-3/4 to 4 percent. The Committee anticipates that ongoing increases in the target range will be appropriate in order to attain a stance of monetary policy that is sufficiently restrictive to return inflation to 2 percent over time.”