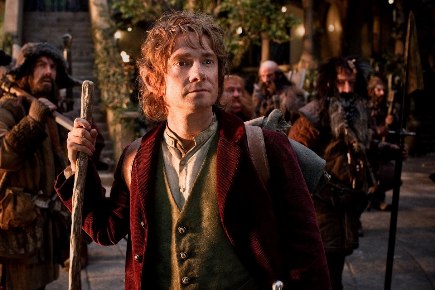 HOLLYWOOD—I was not a fan of the “Lord of the Rings Trilogy.”  It was one of those pictures where I think if you’re not a fan of the books it’s really difficult to get behind the picture.  More notably those films were quite long to say, each clocking close to 3 hours; that’s a long time in a theater seat.  The same applies for the prequel to that franchise “The Hobbit: An Unexpected Journey” which chronicles the journey of Bilbo Baggins (Martin Freeman).
The picture starts off with an old aged Bilbo reminiscing about his past life and chooses to write a story about his adventures.  “The Hobbit” is almost a complete replica of “Lord of the Rings” which takes quite some time to get off its feet.  That is a problem that could easily bore audiences in the beginning because nothing happens; it’s just a character recalling memorable moments.  The pace is quite flat until Bilbo and the dwarves embark on their journey.
During that journey, Bilbo and his friends encounter a wide range of characters from mythical legends, trolls and goblins; some looking to do harm, others hoping to assist with Bilbo’s journey.   “The Hobbit” does indeed have some incredible visuals unlike anything ever captured on film.  The issue with those visuals is the three-dimensional element does take away from the overall effect of the picture. The realism becomes questionable at times.
Ian McKellen reprises his role as the wizard Gandalf who assists Bilbo and the dwarves on their journey to find the lost treasure in Erebor.  It’s a role that could have only been portrayed by McKellen.  While there are also appearances by Cate Blanchett as Galadriel and Hugo Weaving as Elrond, it’s Andy Serkis as Gollum, a disturbing looking creature who is mesmerized so by a ring.  Serkis controls Gollum’s every every move and action.
His portrayal of the character is done with such precision you almost believe that Gollum could exist in real life.  It’s Bilbo’s encounter with Gollum that is a highlight of the picture.  Up until that moment most viewers may have checked out, but those scenes are worth every single second. Gollum is a character that is complicated; you’re never quite sure if you hate the character or feel pity for him.
That’s a testament to great acting on Serkis’ part, even though CGI plays a role its Serkis ability to capture the movements and voice of the character that is exceptional. The picture does end on a happy note.  I will not say I’ll be the first in line for the next chapter for the trilogy, but if the duration is shortened the series has an opportunity to attract audiences not familiar with the novels.