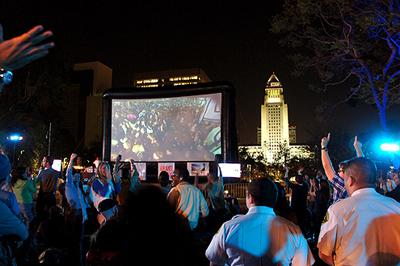 UNITED STATES—I’m pretty sure I was not the only person who was glued to the television screen on Election Day to watch the results of the presidential election.   As much as I wanted to divert my attention to another program, my psyche would not allow me.  I kept flicking the channel back from FOX, to MSNBC, to CNN and every other news station in my cable arsenal.  I was a bit annoyed with how each network was reporting various numbers for each candidate.  One channel reporting Romney in the lead, another channel had Obama in the lead.  Who could I trust?

I felt like I was watching a movie and I was on the edge of my seat.  It was so tense for me because this election could change the direction of the country.  As the polls began closing in various states throughout the night results came pouring in.  There were those swing states that had citizens biting their nails:Pennsylvania,Florida,Ohio,VirginiaandWisconsin.  All states that were extremely close in numbers. Floridawas undecided for a majority of the night, with Obama having a slight lead over Romney, but seeing the precincts pour in those numbers in that state swayed back and forth.

That same concept was visible inOhioandVirginia, but Obama was able to capture those states.  Romney did capture a vast majority of the Southern states, but to edge out the presidency he would have needed to capture one of those swing states with a large number of electoral votes at stake.  It was such a treat to watch the political pundits predict where the votes would come from and various ways candidates could reach the magic number of 270, if they lost a particular statI don’t think there was one person in the house who wasn’t eagerly watching the results to see what the outcome would be.  This election may have been one of the most important and hard-fought battles in a long time.  As much as politics fuels my anger because it’s a subject that is bound to lead to heated arguments, it was nice to sit in front of the screen and partake in watching the outcome of an election, one where my vote made a difference.

Where Next For The Universal Classic Monsters?