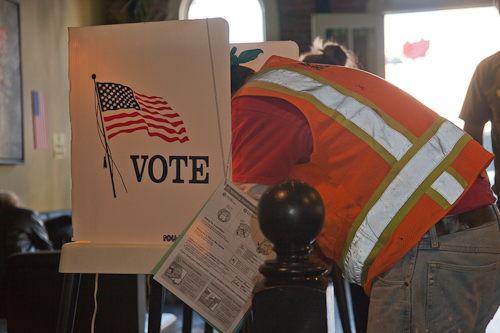 UNITED STATES—So many people thought 2008 was the biggest election of all-time, it was indeed the first time our nation had an African-American aiming to become President.  History was made as Barack Obama was named the first African-American president in our nation.    Fast-forward to 2012, another monumental election is taking place.  Barack Obama in one corner, Mitt Romney in another corner, while those two candidates were the biggest draw to most Americans, many of us had proposals and propositions on the ballot to vote for as well.

My day started with me intending to get up extra early to head to the polls before work, but I was so exhausted from the day before because of a long day of work my initial plans changed.  So I decided I would finish my part-time work duties and head to the polls in the afternoon.  I was concerned about that as I had a feeling heading to the polls in the afternoon everyone would be voting and it would be a huge wait.  I got to the polls and found a bit of a dilemma; the pollsters were not able to locate my name in the system.  I started to panic a bit as I had my voter registration card, I have been voting since I was 18, so I was certain I was in the system.

After about 10 minutes of searching they were able to find my name in the system.  There wasn’t much of a line when I arrived at my polling station, however, once I began filling out my ballot the lines got massive in a matter of minutes.  Everyone was waiting to vote and a smile came across my face.   I was so happy with the turnout; I think I saw way more people voting in this election than in the previous one.  The ballot was a lengthy one to say the least with all of the various verbatim to confuse voters on particular proposals and propositions. It took me about 20-25 minutes to complete my ballot.

I later inserted my ballot into the ballot counting machine and proudly wore my “I VOTED” sticker with a badge of honor.  Funny thing is I wore that sticker all day, I wanted everyone to know that I did my part and made my voice heard in this 2012 presidential election.

Getting the opportunity to cast my vote in the presidential election or any election for that manner is a proud day for me.  So many people before me fought so hard to have this right; I refuse to allow anything to stop me from making sure I perform a civic duty that was not always given to people of past generations.

Different Types Of Bonuses Available At Online Casinos Such As Bons