UNITED STATES—On Thursday, May 19, Archbishop Salvatore Cordileone, of the Archdiocese of San Francisco, instructed the Priest of the Diocese not to administer Holy Communion to Speaker of the House Nancy Pelosi.

On May 20, in his Letter to the Faithful, Archbishop Cordileone issued the following statement:

“There are those who speak of such actions that I am taking as ‘weaponizing the Eucharist [‘Body and blood of Christ], however, this is simply the application of Church teaching. One would have to demonstrate that a person’s actions in following Church teachings are explicitly for a political purpose in order to justify the accusation of ‘weaponizing the Eucharist.’ That one can violate Church teachings and take Holy Communion for a political purpose as well, for one of their own ulterior motives.”

He explained to the Priests of the Diocese that he attempted to meet with Pelosi personally since September 2021.

“In consequence of all of this and all that has led up to it, it is my determined judgment that this resistance to Pastoral counsel has gone on for too long, and there is nothing more that can be done at this point to help the Speaker understand the seriousness of the evil her advocacy of abortion is perpetrating and the scandal she is causing. I, therefore, issued her the aforementioned notification that she is not to be admitted to Holy Communion.” 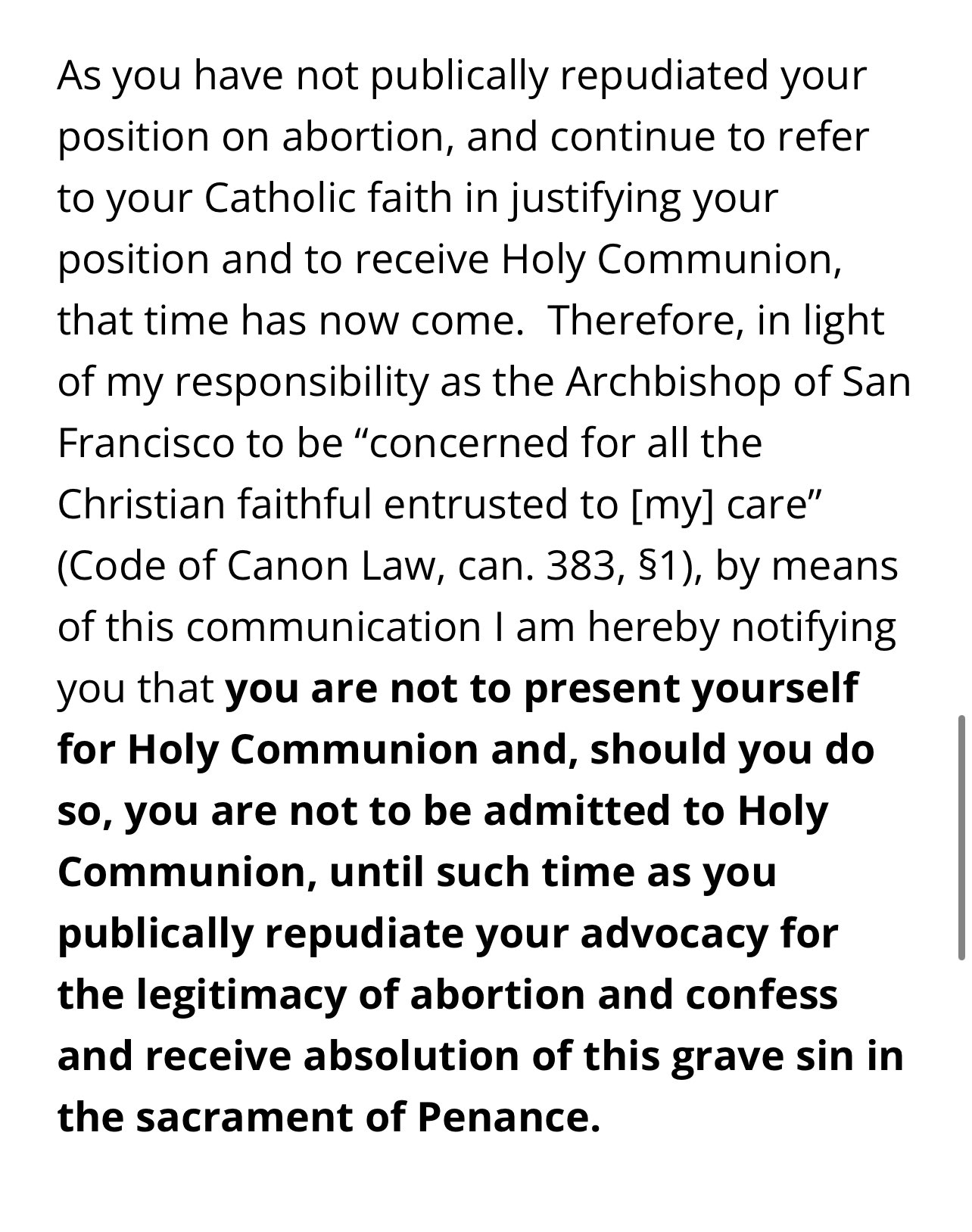 “Thus, this is not a sanction, or a penalty, but rather a declaration of fact,” Cordileone continued, “The Speaker is obstinately persevering in manifest grave sin (Canon 915), a sanction, on the other hand, such as ex-communication, has its own particular process and reasons for being applied. This is quite distinct from the application of Canon Law 915.”

Gloria Purvis interviewed Archbishop Cordileone for her #America podcast. He explained to Purvis he has been discerning the issue for quite some time, offering prayers and fasting before coming to a decision.

Purvis mentioned the rosary campaign Archbishop Cordileone started to pray for Pelosi that he started in the last year. The Archbishop referred to Pelosi’s promotion of abortion as “aggressive.”

Here is the audio podcast interview with ⁦⁦@ArchCordileone⁩ on his decision regarding Nancy Pelosi, communion, conscience, scandal, and his invitation to her to come back to the Eucharist by repudiating her public support of abortion. https://t.co/Awar9h52b4

According to the interview, Archbishop Cordileone has given the invitation to Pelosi to come back to the Eucharist when she is ready to repudiate, or not be associated with the promotion of abortion.