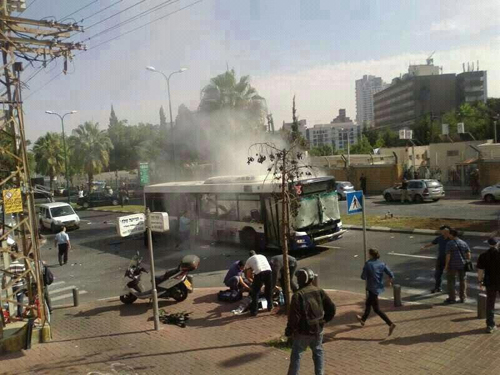 TEL AVIV, ISRAEL—A bomb blast decimated the inside of an Israeli bus this morning, a stone’s throw from Israel’s military headquarters on Wednesday, November 21 injuring at least 24 people, three of whom are in serious condition.

The bus exploded on one of the busiest streets near the Tel Aviv Museum located just across from Israel’s national defense headquarters, at around 12:00 p.m. IST.

Authorities are still trying to determine whether the bomb was left on the bus or whether it was the work of a suicide attack, according to police spokesman Micky Rosenfeld.

“We strongly believe this was a terror attack,” said Rosenfeld.

This is the first major terror attack of its kind since 2006, when 11 people were killed by a Palestinian suicide bomber near the city’s old central bus station.

In Gaza, the Tel Aviv bombing was praised from mosque loudspeakers praising the attack, according to a report from the Washington Post.

Israeli authorities are not pointing their finger at anyone and no one has claimed responsibility.  According to an update by Al Jazeera’s Hoba Abdel-Hamid, they are looking for one, possibly two suspects who left the bus shortly before the explosion.

As of press time, an Egyptian sponsored ceasefire between Israel and Gaza is in effect.