CALIFORNIA−California Governor Gavin Newsom commuted sentences of 21 inmates on Friday, March 27, 14 who had violent offenses such as murder and 5 were pardoned for time served.

The governor was considering  clemency requests prior to the Coronavirus outbreak. The governor’s spokesperson, Vicky Waters said in an email, “and as resources permitted, the Governor decided to move forward with them.”

The following individuals are being considered for release, with final decisions being made at the Board of Parole hearings.

Rodney McNeal, 50, of San Bernardino County, served 22 years for the stabbing death of his pregnant wife. McNeal has claimed innocence in the crime. The California Innocence Project (CIP) requested a commuted sentence, but authorities have  been called to the home for previous domestic disputes.

Kristopher Blehm 35, of Santa Barbara County, served almost 12 years of a 25 year to life sentence for serving as an accomplice in a murder. He reportedly provided the gun and was in the car when the suspect shot into the occupied vehicle killing the victim.

Jason Bryant, 40, of Shasta County, served 20 years for several armed robberies, where one of the victims was fatally shot.

Samuel Eldredge, 61, of Humboldt County served 25 years for the shooting death of his accomplice’s roommate.

Richard Flowers, 64, of Tulare County served over 25 years for the murder of a 78-year old woman during a robbery. Clemency was denied Flowers in 2019 following pleas from prosecutors and public outcry.

Richard Glass, 48, of Los Angeles County served 26 years for murder during a burglary.

David Jassy, 45, of Los Angeles County served 11 years for the murder of a man during an altercation.

Shyrl Lamar, 68, of Sacramento County was arrested after a robbery lead to teh stabbing death of two people by her accomplice. 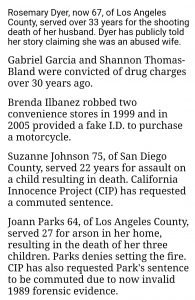 Ramon Rodriguez, 49, of Los Angeles County served 22 years after paying someone to kill his victim.

According to reports, two of the pardons included two immigrants who faced the possibility of being deported.

Tri Thai  was imprisoned for a gang-related assault with a firearm, dissuading a witness and burglary in 1994.

Monsuru Tijani, fearful of religious persecution committed perjury in 1986 and check fraud in 1991.

Canyon News reached out to the Los Angeles Field Office of the Department of Homeland Security to find out more information on the status of the incarcerated immigrants, but did not hear back before print.