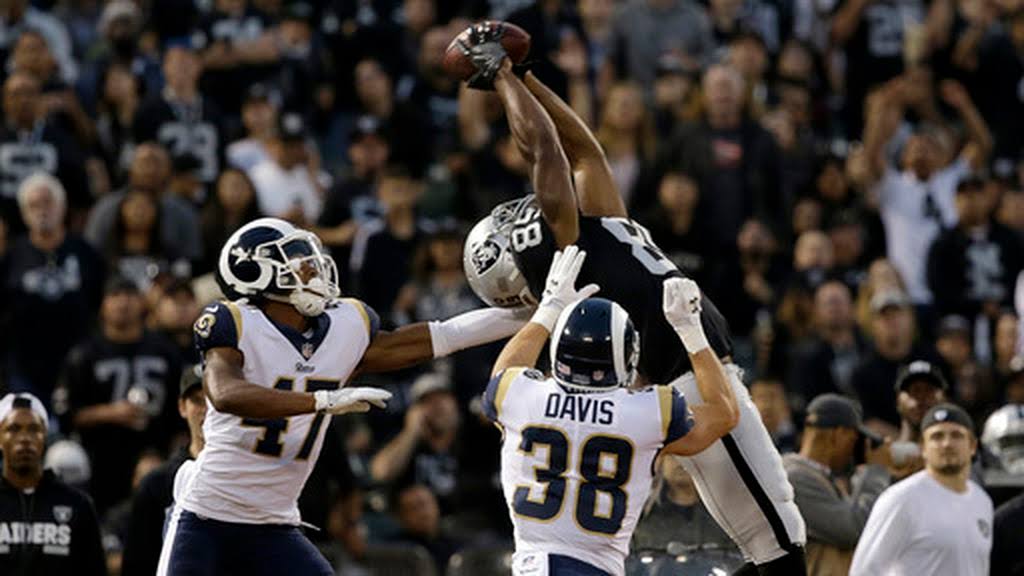 OAKLAND-Raiders Quarterback Derek Carr rushed out of the tunnel to standing ovations at the Oakland Alameda Coliseum, in a quarter of action, he threw two touchdown passes in  vain, as the Los Angeles Rams scored with 1:11 left in the 4th quarter, earning them a 24-21 victory on Saturday, August 19.

The Black Hole remains rabid and loyal as ever, these die hard Silver and Black fans standing behind the end zone, this menacing group of fans are ear piercing  loud.

Normally, they wear shoulder pads with spikes sticking straight out, their makeup black as coal, these particular fans could care less about the Raiders relocating to Las Vegas.

Carr broke his leg last year on Christmas Eve, effectively destroying our hopes of beating the dominant New England Patriots, and reaching Super Bowl LI. Raider fans, including myself, blame Head Coach Jack Del Rio for leaving him in despite having a cushy 18 point advantage in the 4th quarter.

We Will never know if it cost the Raiders a shot at the Super Bowl.  It also marked the return of Running Back Marshawn Lynch, who came out of retirement this offseason to join his hometown Oakland Raiders.

Once again, however, he refused to stand while the National Anthem played. Beast Mode has something left to prove. In limited action, he was swift and powerful, his first carry went for 8 yards.

The Rams drove down the field their first series, Rams QB Jared Goff rolled out of the pocket, and threw a percect rainbow to Wide Receiver Cooper Kupp for a 23-yd touchdown.

Goff threw the parabola pass with a Raider linebacker in his face. Goff is begining to deliver and develop into a great, confident quarterback.

Goff finished 16 for 20 for 160 yards, leading another TD drive that was capped by Todd Gurley’s 2-yard run and a field goal drive late in the first half.

After Oakland’s Connor Cook led a go-ahead drive capped by a 17-yard pass to Johnny Holton with 6:30 to play, Sean Mannion answered for Los Angeles and threw a game-winning 20-yard pass to Josh Reynolds with 1:11 remaining.

On Saturday, August 26, the Oakland Raiders visit the Dallas Cowboys from Arlington Texas. Kickoff is scheduled for 5:00 P.M.

Top 7 Bets To Make On The Belmont Stakes: A Guide To Winning