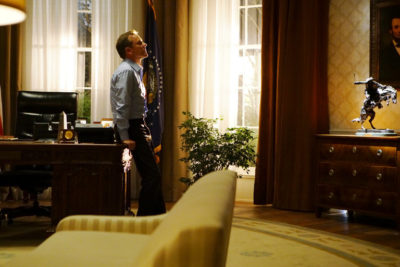 HOLLYWOOD—The season premiere of “Designated Survivor,” a brand new ABC series, aired last night. The show stars Kiefer Sutherland, who plays the main character—Tom Kirkman—and tells the story of a low-level Cabinet member that is appointed as commander in chief of the United States after a catastrophic attack kills everyone above him in the Presidential line of succession.

When we first meet Tom Kirkam he’s dad-ed out: slugging a beer, eating some pizza, watching the president’s State of the Union address and fully equipped with a tattered pair of dad jeans and Cornell zip-up. Tom’s wife, Alex (Natascha McElhone), enters the room munching on a bowl of popcorn and bickering over the phone with their youngest daughter, Penny ( Mckenna Grace), about her bedtime. Tom grabs the phone and they share a fuzzy father-daughter conversation that teaches us two things – first: that Kirkman is a good-hearted family man and second: it is very likely that something terrible is about to happen.

Then—it happens; and by “it,” I’m referring to the root of the entire series. The SOTU telecast cuts out and almost simultaneously, Tom and Alex’s phones start ringing off the hook. Within moments, a gaggle of security details bust through the door and demand they turn over their government-issued BlackBerry’s (yes—BlackBerry’s).

Amidst the disarray, Tom (who at this point, is in a state of shock—and within reason), stumbles towards the window and opens the blinds to unveil what is the Capitol engulfed in flames.

Flashback to 15 hours earlier: Tom—again—is being the ultimate dad – butchering up some pancakes in the kitchen and teasing his two kids with his playful dad banter. He tries to persuade his outwardly angsty and complicated teenage son, Leo (Tanner Buchanan), to babysit his younger sister; but expectedly, that’s a flop, because Leo has made much more important plans: “[Caleb’s] laying down a new dubstep track and I need to write program for him.”

The scene shifts back to post-disaster, where Tom and Alex are being hurried out of the building by the Secret Service and chauffeured off to the White House. Secret Service Agent Mike Ritter ( LaMonica Garrett) breaks the news: “The eagle is gone; congress, the Capitol – none of them made it.” He adds, “Sir, you are now the President of the United States.”

How did that happen? Well, during the State of the Union, one member is taken to an undisclosed location. In the event of a catastrophic attack on our government, that cabinet member becomes our new president. They are known as the designated survivor—and yes, it does really exist.

What we come to learn is that Tom Kirkman is the Secretary of Housing and Urban Development—which is a relatively prestigious position in the grand scheme of the Washington hierarchy.

However, what we also come to learn is that Secretary Kirkman is disregarded in the sharp-elbowed halls of D.C.: he can’t convince POTUS to give his housing initiatives a shout-out and he can’t even get an invite to the SOTU– all in all, he’s a nobody. So, Secretary Kirkman spends the evening cozied up with his wife, watching the SOTU via television and digesting the fact his higher ups appointed him the “designated survivor” – a.k.a., the person who becomes president in the incredibly unlikely event that the president and all of his cabinet members simultaneously die – while all of the actually important people attend the SOTU.

Tom and his wife are whisked off to white house (yes—he’s still wearing a hoodie and dad jeans), where he is sworn in as the President of the United States and spends the remainder of the episode doubting his abilities – as does everyone around him. To top things off, the White House tried to fire him earlier that day and ship him off to Canada to be an ambassador – as if his self-confidence wasn’t low enough.

A speechwriter named Seth Wright (Kal Penn) trash-talks Kirkman in a bathroom stall, calling him “the lowest rung on the ladder” – that is, before he realizes he’s actually talking to the president himself. Kirkman hits him with an awkward confrontation, but renders no bad-blood; he even recruits him as his speech writer – giving him a scant 52 minutes to write him a speech what would likely become the most important speech of his presidency.

In the situation room, the Commander-In-Chief is faced with the impossible task of figuring out who bombed D.C. and why, while all of America’s enemies are calling to plea their innocence. Then, he’s faced with his first presidential decision: how to deal with Iran sending navy destroyers to seal off an oil-heavy region.

President Kirkman opts to withhold naval confrontation and consult with the Iranian ambassador first. He starts off cordial, but then tears down his soft-spoken façade and rolls up his sleeves, demonstrating a brilliant balance of diplomacy and force.

The Pilot episode ends with the Commander-In-Chief ready and raring to address the nation. The lights come on and Kirkman begins, “My fellow Americans” – then, the screen cuts black.