UNITED STATES−A man has been arrested after allegedly slapping a juvenile wearing a Make America Great Again after exiting a polling station in New Hampshire on Tuesday, February 11.

Patrick Bradley, 34, entered a Trump tent outside Windham High School at the Granite, New Hampshire primaries and slapped 15-year-old Nate Campbell. The teen told Bradley to, “have a nice night,” just before he was slapped. 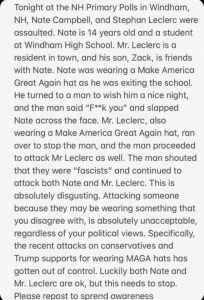 The teen’s mom, Cathy Campbell told Fox News, “My son is the most patriotic kid you’d ever meet in your life.”

Bradley has a criminal record and was seen throwing Trump signs in a tangent and attempting to tip the tent. Adults later indicated they were also hit by Bradley who was arrested on Thursday, February 13, on three counts of simple assault and disorderly conduct charges. He is being held on a $5,000 cash bail and an administration hold due to a probation violation. 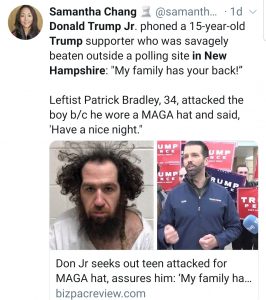 Bradley is a twice-convicted felon where his social media page reads: “Somebody recently said that Antifa was a terrorist group because of their protests at Berkeley when they set things on fire. So what does that make sports fans?”

Maine State Police records indicate that they searched Bradley’s car on January 13, 2017 and discovered 7.7 pounds of vacuum sealed bags of marijuana in his car resulting in a felony drug trafficking charge. 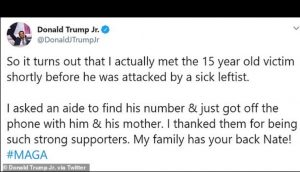 President Trump can be seen contributing to a child’s bake sale, while poll workers instructed the family on New Hampshire’s voting process as they cast their votes. The President was in the area and met the teen just before he was assaulted.

Canyon News reached out to Windham County Police Department for a statement, but have not heard back in time for print.