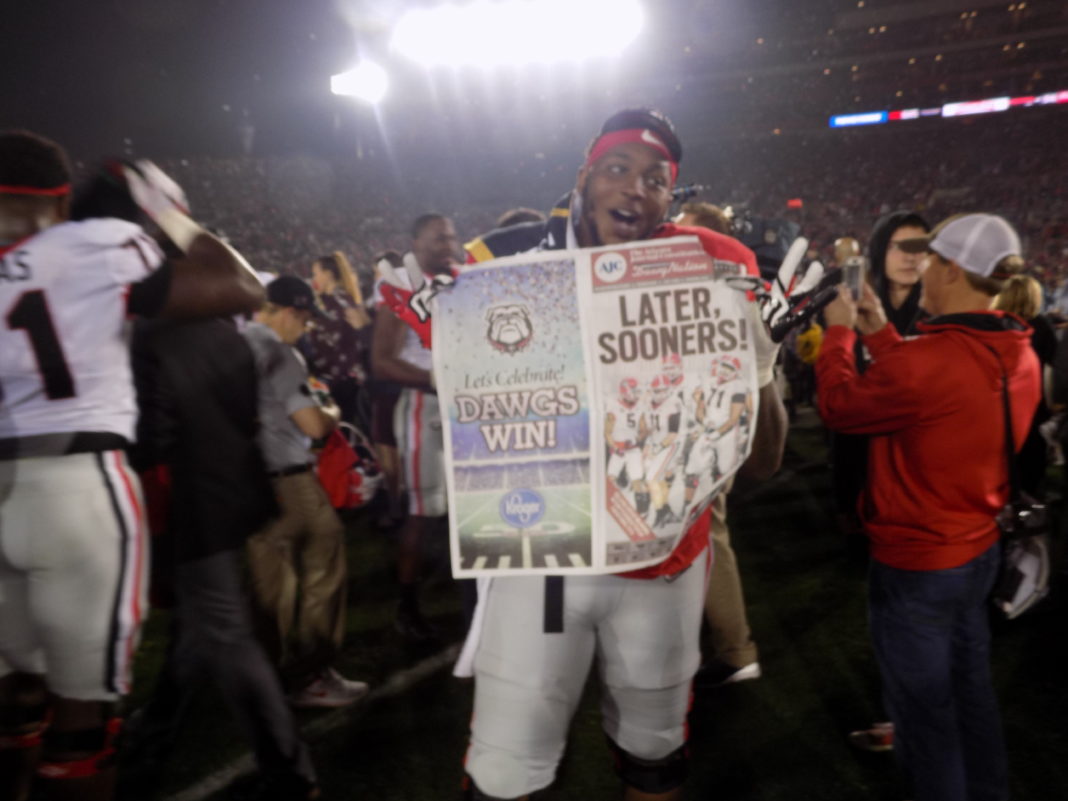 PASADENA—We should all hope and pray 2018 is anything like the 104th Rose Bowl- where the No. 3 ranked Georgia Bulldogs defeated the No. 2 ranked Oklahoma Sooners in double overtime, 54-48 on Monday, January 1.

It set the record for points (102), the first Rose Bowl to go into overtime was capped off by a 27-yard walk off touchdown run by Sony Michel sent the Dawgs barking at the stunning moon.

The Rose Bowl was one half of the College Football Semifinal, meaning Georgia will face the Alabama Crimson Tide on Monday, January 8 for the national title, from Mercedes Benz stadium in Atlanta, GEORGIA!

Although the matchup was billed as Oklahoma’s explosive offense against the Dawgs’ ferocious defense, from the opening kickoff it was an inspiring, heart pounding Score-a-Thon. Oklahoma quickly jumped out to an early lead, holding a 31-14 edge, prior to Georgia’s second half comeback.

The impressive comeback was spearheaded by the two headed monster running back duo of Nick Chubb and Sony Michel. Ripping through Oklahomas’ defense for a combined 360 yards. Including Michels 27 yard stunning walk-off TD.

“I’m a physical running back and I don’t mind contact, I like to get out there and just run,” said Chubb on Media Day. Media Day was held Saturday, December 30.

The Bulldogs defense also awoke in the second half, Linebacker Raquan Smith and the defense held OU to 170 yards; and clobbering Heisman Trophy winner QB Baker Mayfield to the turf for five sacks.

Michel, who had a fumble in the fourth quarter returned for a go-ahead Oklahoma touchdown, ran for 181 yards and three scores for the Bulldogs (13-1), but nothing as monumental than the last one.

“I made plays. I gave up plays. My team just had faith in me,” said Michel. He coughed up the ball late in the fourth, when Oklahoma returned the fumble to the house, taking a 45-38 lead.

In the final game of his great career, Oklahoma’s Baker Mayfield threw for 287 yards and two touchdowns, and caught a touchdown pass that gave the Sooners a 17-point lead with 6 seconds left in the first half.

But the Heisman Trophy winner could not get the Sooners (12-2) into the end zone in the first overtime when a touchdown would have ended the game.

For the first time in 104 years, football fans were treated to not only one but two record setting overtime periods. The teams swapped field goals in the 1st OT before unsung hero Lorenzo Carter lept like a gazelle blocking a Sooners field goal.

True freshman QB Nick Fromm, one of only 2 freshmen to ever start in a Rose Bowl game, was poised for such a task.

Trailing by seven with 3:22 left on the clock; he guided his team 59 yards down the field to even the score 48 all. Chubb punched it in from 2-yards, making a nifty cut before crossing the goal line.

This instant classic was headed for “Free Football.”

Yet the season isn’t over, this was college football semi-final; Alabama cruised to a 24-6 win over Clemson in the Sugar Bowl. Georgia Head Coach, Kirby Smart, is very familiar with legendary Head Coach Saban and Bama, after all, he was the Defensive Coordinator for Alabama for six years, resulting in two National Championships.

It sets up an all SEC final- Georgia crushed Auburn in the SEC title game in December. Can the Georgia Bulldogs beat another Alabama powerhouse in the span of a month? Akin to the 1st SEC Championship, this one will be played a stone’s throw away from the Bulldogs campus in Athens. On Monday, January 8 from Mercedes Benz stadium in Atlanta!