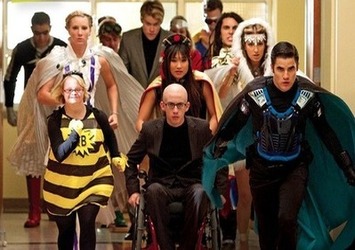 HOLLYWOOD—We are introduced to some interesting superhero alter-egos adorned with weird costumes and odd super powers. “Dynamic Duets” has some fun twists and turns for avid “Glee” fans.

The episode begins at a meeting for the Secret Society of Superheroes Club which is run by Blaine (Darren Criss), or known in the club as “Nightbird.” Coincidentally, a crisis happens to occur during one of the superhero club meetings. The glee club members rush to the choir room where they see that their Nationals first place trophy is gone and in its place is a laptop.

They play a video via the laptop that has a blurred image and technologically-distorted voice of Hunter (Nolan Gerard Funk), the new captain of the Dalton Academy Warblers, stating he has taken the trophy. Blaine goes to the Warblers, his former glee club, to retrieve the trophy but he ends up singing with the group to Kelly Clarkson’s “Dark Side.” Blaine is conflicted when Hunter offers to give back the trophy only if Blaine joins the Warblers again. He begins to consider it as he only joined the New Directions for Kurt (Chris Colfer) but they aren’t together anymore and hee feels like he doesn’t belong anymore.

***image3***Sam (Chord Overstreet) lets Blaine know that he is a good person who may have made some bad choices but he does not need to continuously punish himself because of that. Blaine and Sam sing David Bowie’s “Heroes” and do a series of good acts which helps convince Blaine to stay at McKinley High. Together they return to Dalton and get back their Nationals trophy.

On the other hand, Finn (Corey Monteith) is struggling with his new leadership role as the glee members can’t take him seriously. It seems as if his new fashion statement with sweater vests much like Mr. Schuester’s (Mathew Morrison) aren’t convincing anyone that he is an adult. Therefore, Finn uses the superhero club as inspiration to create the weekly assignment titled “Dynamic Duets” where enemies have to work together in preparation for the upcoming Sectionals.

Marley (Melissa Benoist) has found herself in a bit of a love triangle, thus, Jake (Jacob Artist) and Ryder (Blake Jenner) see themselves as rivals and attempt to serenade her with “Superman.” The performance, however, never reaches a conclusion as the two end up getting into a fist fight. Finn uses another tactic to get the two to become amicable towards one another by giving them an additional assignment, tell each other their deepest fears.

Jake eventually reveals that he is self-conscious about being mixed-race and Jewish while Ryder is unable to read properly. Jake lets Finn know about Ryder’s condition who then takes Ryder to a specialist in order to take a test. The results reveal that Ryder is dyslexic and he will begin to have separate studies to tackle on his dyslexia. Jake and Ryder slowly begin to form a friendship and Ryder even defends Jake from some bullies who were planning to beat him up.

Jake is confused because he still likes Marley, even though he turned down her previous advances, but Ryder is interested in her as well. Jake calls his half-brother Puck (Mark Sailing) to ask for advice and Puck encourages him to continue to pursue Marley despite his friendship with Ryder.

Marley is paired with Kitty (Becca Tobin) who convinced Marley that she is losing weight in order to further her bulimia. Kitty pretends to be her friend as they sing “Holding Out For a Hero” together. Kitty’s plan to weaken Marley’s self-esteem backfires as Marley becomes more confident after the performance and decides to go out with both Jake and Ryder.

In the end, Finn proved himself to be a great leader as he was able to bring the new and former glee members to come together as one united team. The New Directions embrace Finn as an adequate director and do a group performance of the hit-song by Fun, “Some Nights.” The next episode will be taking place at Sectionals where a couple of surprise guests will appear.

“The Chi” Recap: ‘The Girl From Chicago’