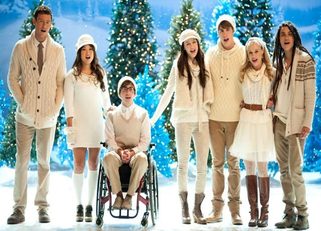 HOLLYWOOD—This year’s Christmas episode of “Glee,” titled “Glee Actually,” was a tribute to the film “Love Actually” and had five different story lines dealing with the holidays.

The episode begins with Artie (Kevin McHale) angrily shoving papers in his locker with a gash on his face. Finn (Corey Monteith) takes him to the nurse when he finds out that Artie fell from his wheelchair due to an icy ramp and couldn’t get up on his own. Artie is notably angry that he will forever be bound to a wheelchair and his accident never happened.

Suddenly, we delve into an alternative universe in black-and-white where Artie is a jock and able to walk. His guardian angel, Rory (Damian McGinty), shows him how different everything is because he was never in a wheel chair. Finn and the other jocks from the glee club never form a bond with those different than them. Thus, they are found bullying Kurt (Chris Colfer) who had to stay back a year because he kept skipping school to avoid the harassment.

Additionally, Mr. Schuester (Mathew Morrison) becomes an alcoholic as he never achieved his goal of forming a glee club. He is still married to his wife Teri (Jessalyn Gilsig) who carries around a doll for a baby without her husband knowing she lied about ever being pregnant. The worst result was Quinn having died after becoming wheelchair bound herself due to a car accident texting and driving. She never had Artie’s support and guidance which led to her death. Artie tries to fix things in the dream world by singing “Feliz Navidad” to everyone who was meant to be part of the glee club. It was fun to see Artie being playful and dancing around in this episode. Sadly, no one is impressed and Artie realizes that his wheelchair is a part of him that has proven beneficial to many lives.

Meanwhile, in New York Kurt is surprised when his dad, Burt (Mike O’Mailey), appears at his door with a Christmas tree. Father and son spend quality time together when Burt reveals some heavy news, he has been diagnosed with prostate cancer. It was caught in the early stages and there are no signs of spreading but he still told Kurt what he’s learned from the experience, keep the ones you love close. His second surprise was bringing along Blaine (Darren Criss) to New York who was waiting for Kurt on an ice skating rink. Their duets are always spectacular, this time singing “White Christmas.” Their relationship status is still in progress but they seem to be patching things up. Also, Blaine revealed that he wants to apply to NYADA as well. Jake’s (Jacob Artist) gets into a fight at school and his half-brother, Puck (Mark Sailing), has to break up the fight. He decides to bring Jake back to L.A. with him so they could have an adventure together. They ride in to Paramount Pictures and walk around different sets singing “Hanukkah, Oh Hanukkah.” Jake soon learns that Puck has been lying about his lavish lifestyle in the west coast and decides the two of them should get their mothers together and have a family dinner. At first there is some animosity between the two single moms but they soon realize the bond the brothers have made so they make a truce.

Brittany (Heather Morris) and Sam (Chord Overstreet) are convinced the Mayan Apocalypse is real and they have to enjoy their time until the end of the world. Sam sings “Jingle Bell Rock,” arguably the best holiday song, and then proposes to Brittany. These two are a bit ditsy but together they have many funny moments. Coach Bieste (Dot-Marie Jones) apparently is ordained on a Mayan website and marries the two. The couple soon realize the apocalypse rumors were false and regret the marriage. Turns out Coach Bieste lied about being ordained in order to avoid another couple marrying too young.

The last storyline, and the most touching, is with Coach Sue (Jane Lynch) who picks Millie Rose’s (Trisha Rae Stahl) name out of a hat for the faculty Secret Santa. At first, she makes various comments regarding Millie’s weight and doesn’t know what to get her. She then overhears about Marley’s (Melissa Benoist) and Millie’s financial troubles as they try and have enough to pay for Marley to get professional help for her bulimia. Marley also sings “The First Noel” as a Christmas gift to her mom. Sue takes it upon herself to provide the two with a fully decorated Christmas tree, plenty of gifts and $800. Marley shows her gratitude by getting the glee club together to sing “Have Yourself a Merry Little Christmas.”