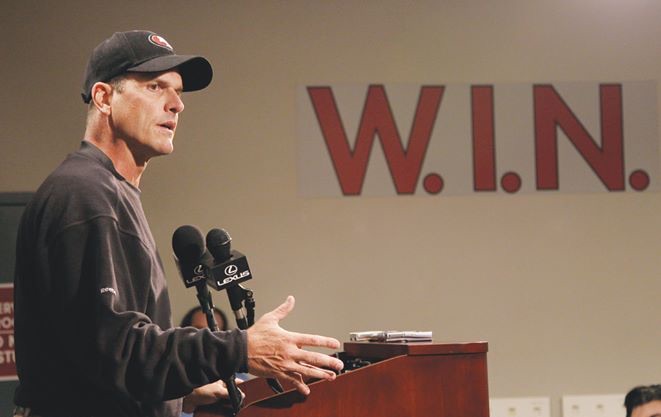 SAN FRANCISCO—In perhaps the most head-scratching coaching decision since the 2006 firing of Marty Schottenheimer, let go by the Chargers following a 14-2 season, there is mounting evidence that December’s games could be Jim Harbaugh’s last as the 49ers head coach.

Rumors surround the fourth-year head coach, who has led the Niners to three consecutive NFC Championship games, including one Super Bowl. One possibility is trading Harbaugh’s services to another franchise.

Despite Harbaugh’s early success in San Francisco, reports suggest many in the Niners organization have soured on the coach’s approach.

Mired in a 7-5 season where the team has never quite looked like the powerhouse that boasted a 35-12-1 record in Harbaugh’s first three seasons, San Francisco is currently on the outside looking in on the NFC playoff race. Their demoralizing Thanksgiving loss to rival Seattle putting them two spots out of the conference’s sixth seed.

If dangled as trade bait, Harbaugh would prove an enticing possibility for a number of coach-hungry teams. First on the list could be the nearby Oakland Raiders, a franchise in a constant state of coaching limbo that could certainly benefit from Harbaugh’s influence.

Speaking to reporters in his weekly press conference, Harbaugh was asked about his future with his current franchise.

“I really, I don’t worry about my future. I haven’t participated in any of that speculation. I just, I think I have a recessive gene for worrying about my own future.”