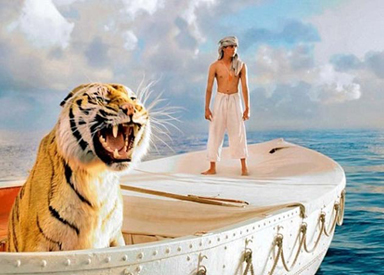 HOLLYWOOD—Unless you’ve been sleeping underneath a rock you’ve heard about the drama “Life of Pi” from acclaimed director Ang Lee “Brokeback Mountain” and “Crouching Tiger Hidden Dragon.”  Lee is a visual genius behind the camera and does exceptional work for his latest picture which is presented in glorious three-dimension.

The story is based off of the popular 2001 novel by Yann Martel that tells the story of a young man stranded at sea with a tiger.  Yes, that’s right it’s a tiger.  Sounds like an interesting set-up and it is.  I must acknowledge for the spectator that this is a picture that requires patience; things are not happening at super speeds as one expects it to, but the impact of the picture as a whole is what is awesome.  Your spirits are lifted to new heights after watching this tale of survival and hope.  Not in a million years can one expect a tiger and a human being to work together.  Pi because of his experience growing up around animals has a compassion for the creature.  If the duo fails to work together they will not survive long at sea.

It’s a story that is unbelievable to fathom just watching on the screen, because there’s no possible way any of this could truly happen.  That’s the magic of filmmaking as a spectator you start to begin thinking what if that was me?  How would I react in that situation, what would I do to survive.  Suraj Sharma does a stellar job as the title character Pi.  It’s difficult to see an actor act opposite a tiger on the screen, while stranded at sea.  Of course a lot of digital effects were used for the picture as well.

The story told in the picture is so captivating that words do not do justice.  I found myself easily drawn into this picture early on; even though there are not many human characters on the screen, the geographic backdrop and animals in the movie are characters in themselves. Lee presents an effective balance of visuals with character analysis in the picture that is sure to be praised come awards season.  “Life of Pi” is an extraordinary tale of survival amongst the most improbable circumstances.