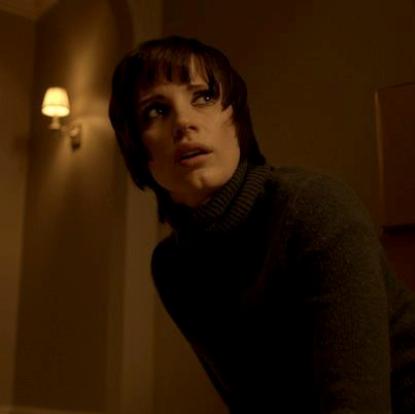 HOLLYWOOD—Guillermo Del Toro is a genius as a director and filmmaker who has provided his name behind some popular flicks in the recent years.  The supernatural chiller “Mama” chronicles the tale of two sisters Victoria (Megan Charpentier) and Lily (Isabelle Nelisse) who vanish from their suburban neighborhood without a trace.  In the midst of their disappearance, the children’s uncle Lucas (Nikolaj Coster-Waldau) and his girlfriend, Annabel (Jessica Chastain) have been frantically searching for them.  The sisters are found in a desolate cabin where how they survived the past five years is placed into question.

As the girls struggle to adjust to normal life in the home of their uncle and his girlfriend, the adults begin to question the behavior of the kids.  They are talking to an unknown presence, a supernatural entity that is fixated on protecting the children.  The script which is written by Neil Cross, Andres Muschietti and Barbara Muschietti is ripe with character development; none of these characters are one note, especially Chastain who is almost unrecognizable in the picture.

She has a punk-rockster look going for her, while she is at first skeptical of taking the girls in, once they become apart of the family she does her best to bond with them and to protect them from whatever evil may be out to do harm to them. It’s through that bonding that “mama” becomes quite a menacing force to say the least.  What separates this horror tale from so many others is its ability to not fool the audience, and that’s a great thanks to director Andres Muschietti.  The viewer is well aware that a scare is in place, but it’s the element of suspense that ultimately delivers the thrill.  You don’t quite know when it will happen, but you know something is going to happen, and he uses careful placement of the camera to deliver that jolt.

The scares do indeed come a mile a minute and will unnerve even some of the toughest moviegoers.  Particularly that scene about a monster being under the bed, as well as the scene where from a distance where an evil presence is seen lurking.  The jolts come out of nowhere which is the best scares.  “Mama” is a movie that will keep its audience glued from start to finish.  You want to know what has happened to these little girls all this time, but more importantly just what is after them and if it can be stopped.  This flick proves that a movie does not have to be rated-R to be scary, its all about simplicity and timing.  With the right set of characters, story and directorial abilities any tale can be scary even one that chronicles the love of a mother.