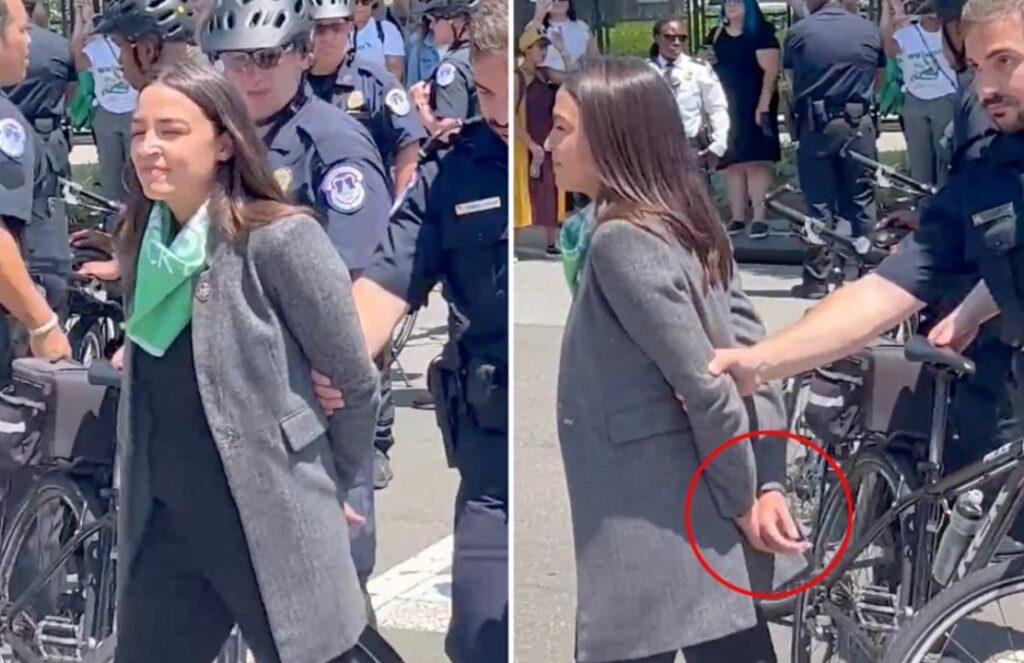 UNITED STATES—On July 19, Congresswoman Alexandria Ocasio-Cortez, and 17 other members of Congress, and 35 protestors were escorted away from the Supreme Court of the United States (SCOTUS) in Washington D.C. While Capitol Police Officers escorting them away, Ocasio-Cortez, Ilhan Omar, and others placed their hands behind their backs as if they were handcuffed. 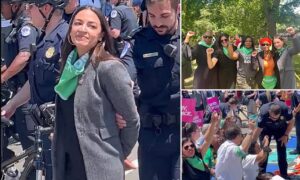 Video captured reveals no handcuffs on Ocasio-Cortez. She was wearing a gray woolen winter coat over her clothes in the 91-degree heat, and when she saw all the cameras trained on her, she pumped her fist in the air.

In a YouTube video, Congresswoman Ocasio-Cortez smiles while speaking of her arrest.

Capitol Police posted a tweet warning the public that protestors were blocking the street. After multiple warnings they were escorted out. In a tweet, Rep. Omar called the arrests, “Good Trouble.”

A portion of the crowd wore matching green bandanas and stopped to be photographed. According to reports, Democratic members of Congress were placing their hands behind their backs in “non-violent civil disobedience.” The demonstration went viral on social media and was referred to as a “mock” or “fake arrest.”

Capitol officers could be heard on their megaphones warning the protestors to “cease and desist.”

Reports indicate that there have been protestors outside SCOTUS since the overturning of Roe vs. Wade on June 24, with the case Dobbs v. Jackson. Abortion is no longer a constitutional right. The responsibility has been given back to the states to make the decision based on constituents that voters have elected into office.