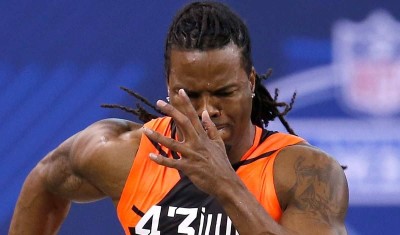 Though McCarthy and Jefferson project as low-round picks, Hundley, Kendricks, and Odighizuwa all showed-out well in Indianapolis, putting all three in the conversation for a first-round selection.

Though Hundley didn’t meet his goal of being the fastest quarterback at the combine (that honor went to Oregon’s Marcus Mariota), Hundley wowed scouts in throwing drills, delivering the ball with both authority and accuracy.

Following his combine performance, in which he impressively delivering his deep ball to the left side of the field, Hundley has firmly established himself as the draft’s third-best signal caller.

For his part, Kendricks didn’t have to do much to cement his athletic pedigree. His brother, Mychael, put on a show at the combine three years ago, a performance that helped earn him a second-round selection by the Philadelphia Eagles.

While not quite the physical specimen his brother is, Kendricks proved that he is an explosive athlete in his own right, clocking a 4.66 40-yard dash and posting a 38-inch vertical jump. Following the expected run on pass-rushers in the first-round, Kendricks projects as a second-round selection.

And yet, Kendricks’ defensive mate, Odighizuwa, may have had the most stock-boosting performance of all.

Those close to the UCLA program have known for years that Odighizuwa possessed freakish athletic ability. However, the defensive-end made the most of his opportunity to make this common knowledge amongst NFL scouts.

At 6 feet and 3 inches tall and 267 pounds, Odighizuwa ran a scorching 4.62 40-yard dash, bench-pressing 225 pounds 25 times, and posting a 39-inch vertical jump, the best vertical amongst all defensive linemen in Indianapolis.

After missing all of 2013 with a hip injury, the defensive end was a bit of an unknown quantity before his senior season. However, after a rock-solid 2014 and a phenomenal combine performance, Odighizuwa has soared up draft boards.

He is projected as a low first-round selection, as pass-rush hungry teams such as Indianapolis and Dallas will have a hard time be passing on an end with his upside.

At @jonmachota tweeted: “UCLA DE Owamagbe Odighizuwa is a projected 1st rd pick. Has an interview scheduled with Cowboys. “Talked to them a lot at the Senior Bowl.”