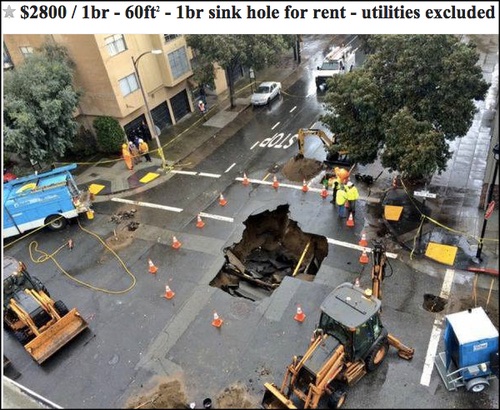 SAN FRANCISCO—Following days of heavy rainfall, storm-drain failures has caused several sinkholes to open in the streets of San Francisco

As of December 4, at least four sinkholes have opened, the largest in the Lake Street neighborhood. The chasm opened approximately 20-30 feet and is reportedly growing in size as rainfall continues and the sinkhole devours more asphalt of the Sixth and Lake Street intersection.

The size of a swimming pool, the sinkhole has became a bit of an Internet sensation, even inspiring a viral Craigslist advertisement. The the “one-bedroom sinkhole,” located in a prime real estate location, was listed for $2800/month.

The listing has since been removed from Craigslist.

The damages to the surrounding infrastructure forced some residents to temporarily be without gas and water. As repairs were underway, it was revealed that upgrades to the drainage network will be vital, as the damaged portion beneath the intersection was built from bricks over a century old.

Repaving of the intersection should begin early next week. The intersection, still passable by pedestrians, should re-open for vehicles by Wednesday.

Coping With The Boredom People

‘Interlude’ Of Michael St. John’s Next Novel “Fast Ride On A...