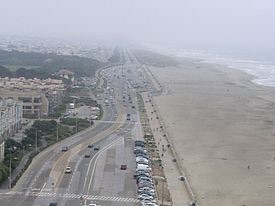 SAN FRANCISCO—An unidentified 50-year-old man was struck by a white sedan while crossing the Great Highway near Ocean Beach on December 4.

The man, described as a skateboarder in his 50s, was hit by the northbound traveling vehicle shortly after leaving the parking lot of the nearby Beach Chalet Restaurant and Brewery.

The victim was rushed to San Francisco General Hospital in critical condition.

The driver, 50-year-old Krista Cummings, remained at the scene, where authorities later discovered her to be under the influence of a controlled substance. She was subsequently arrested on suspicion of DUI.

Though the investigation is ongoing, Cummings’ initial arrest was reportedly unrelated to the crash.

Public Libraries Will Now Offer A To Go Service

2020 PGA Championship Will Be Hosted At San Francisco Park