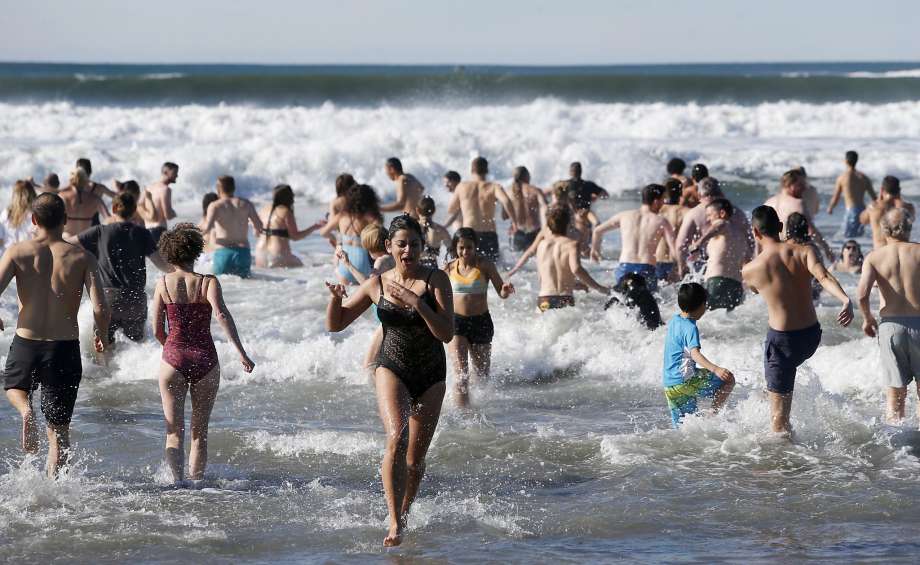 SAN FRANCISCO—Nearly 200 people plunged into the waters of Ocean Beach on Sunday, January 1, to celebrate the New Year.

“You’re not able to think of anything. It’s a clean slate. It’s like an empty canvas. You can totally start the year fresh with your new intentions and resolutions,” Alex White told the San Francisco Chronicle.

“It’s a way to wash off everything from the year before,” White said.

The six year tradition has grown from just a couple people in 2011, into a larger crowd of people wanting to cleanse their slate for 2017.

“It was started by a regular at The Riptide and only two people jumped in the first year. Now there are hundreds of people each year,” Riptide bar manager Alisha Liscinsky told Hoodline.com.

While the event is loosely organized, many participants head over to the Riptide bar to warm up and drink their signature spicy Bloody Marys after the big plunge.

Riptide recently recovered from a 2015 fire and saw more participants than prior years, Hoodline reported.

For participant Brad Corteza, from Austin,Texas, the experience exemplified the eccentric San Francisco spirit, he said to the San Francisco Chronicle.

Corteza jumped in the ocean water wearing a suit and tie from the night before.

“San Franciscans — they are all crazy. And that’s coming from an Austinite,” Corteza said.

This year’s plunge was publicized on FunCheapSF.com