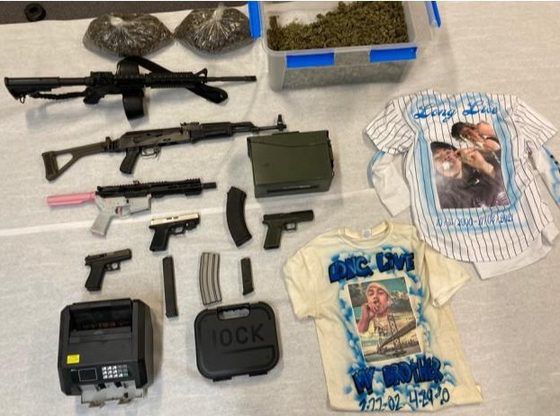 SAN FRANCISCO—Several arrests have been made in connection to a robbery and shooting incident that transpired on May 28. The SFPD reported at approximately 4:15 p.m., officers from Ingleside Station responded to the 3700 block of Mission Street regarding an armed robbery. Officers met with the 41-year-old victim who said he parked his car on Mission Street and was approached by two male suspects who pointed firearms at him.

Following a brief struggle, the victim fell to the ground. One suspect took the victim’s watch. Both suspects got into a car and fled the scene. Investigators from the SFPD Robbery Detail took over the investigation and identified one of the suspects as Robert Garcia, 19, of San Francisco.

On Wednesday, December 1, investigators from the SFPD Community Violence Reduction Team, Crime Gun Investigations Center, and the Bureau of Alcohol, Tobacco, Firearms, and Explosives responded to the unit block of Higuera Avenue. Officers took Garcia into custody. A second suspect identified Emmanuel Jessop, 22, was also taken into custody. Investigators determined that Jessop was not involved in the robbery on Mission Street.

Investigators obtained a search warrant for the premises in which Garcia and Jessop were located. After serving the search warrants, investigators located six firearms, including three assault rifles. Investigators also located several rounds of ammunition, firearm accessories, narcotics, and evidence linking them to other open criminal investigations.

On November 22, at approximately 11:08 a.m., officers from Richmond Station responded to the area of 26th Avenue and Geary Boulevard for a report of shots fired. Officers arrived on scene and located several cars had been struck by gunfire along with spent shell casings. Witnesses reported seeing two vehicles fleeing the scene at a high rate of speed following the incident.

On November 24, at approximately 12:14 p.m., officers were patrolling the area of 16th and Kansas Streets when they spotted a vehicle that was wanted in connection with the Richmond District shooting. Officers initiated a traffic stop on the vehicle, that fled and the officers initiated a pursuit. The pursuit continued onto eastbound Interstate 80, across the Bay Bridge, and onto Oakland City streets. The suspect’s vehicle was involved in a solo collision at 34th and Linden Streets. Officers parked their patrol vehicle behind the suspect’s vehicle that reversed, collided with the SFPD vehicle, and continued to flee on Linden Street. Officers terminated the pursuit in the area of Harrison Street and Thomas L. Berkeley Way.

At approximately 12:39 p.m., Oakland Police officers responded to Perry Place and Orange Street about a vehicle collision. Officers arrived on scene and located an unoccupied vehicle that was involved in a solo collision. Officers determined that the vehicle was the same as the one that was pursued by SFPD officers. Oakland officers advised that the suspects were possibly in the area of the 400 block of Adams Street.

Officers canvassed the region for the suspects/occupants, but were unable to locate them. Officers searched the suspect’s vehicle and located several firearms.

Officers developed information that identified one of the suspects that was involved in the incident. The suspect was identified as Kingsley Uzoma, 18, of Daly City. On December 1, at approximately 1:33 p.m., officers from the SFPD were on the 800 block of Bryant Street when they observed Uzoma and took him into custody without incident. He was booked at San Francisco County Jail on charges of; assault with a deadly weapon (245(a)(1) PC), assault with a deadly weapon upon a peace officer (245(c) PC), felony reckless evading (2800.2 CVC), carrying a loaded firearm in public (25850(a) PC), possession of an assault weapon in California (30605(a) PC), and conspiracy (182(a) PC).

Investigators from the SFPD Crime Gun Investigations Center (CGIC) developed information that linked Uzoma to a residence on the unit block of Maxwell Court that contained illegal firearms.

On December 1, , at 5:50 p.m., investigators from CGIC, Mission Station, and the Bureau of Alcohol, Tobacco, Firearms, and Explosives served a search warrant on the residence on Maxwell Court. Investigators located Terrance Hall, 20, inside the home. Hall was taken into custody. Investigators searched the premises and located two firearms, and several rounds of ammunition. Hall was booked at San Francisco County Jail on charges of; possession of an assault weapon in California (30605(a) PC), and transportation of a machine gun (32625(a) PC).

The SFPD are still investigating the case. Anyone with information is asked to call the SFPD Tip Line at 1-415-575-4444 or Text a Tip to TIP411 and begin the text message with SFPD. Tipsters may remain anonymous.