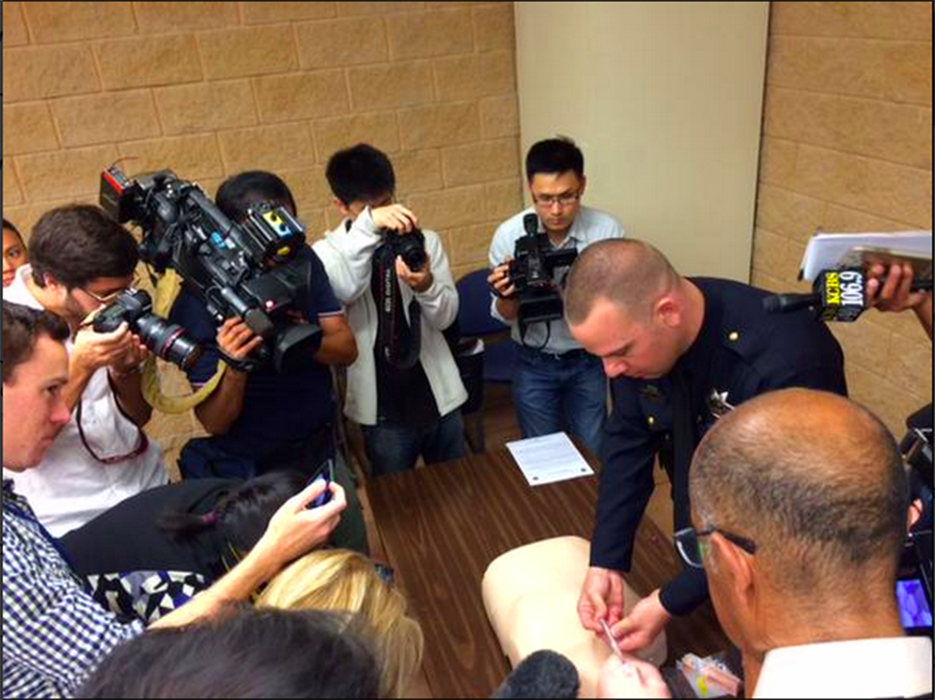 SAN FRANCISCO—San Francisco Police Officer Mike Mellone is being recommended for the San Francisco Police Department’s (SFPD) “Life Saving Award” after rescuing an unidentified man found unconscious on 16th and Capp Street. According to police officials, the man had overdosed on heroin.

Mellone responded to a call at approximately 5:52 p.m., on June 14. Witnesses reported to SFPD that the man was in the middle of the street, and rolling around from a suspected overdose.

Mellone stated in a press conference on Friday, August 28, “When I arrived, I found this man down on the ground, in the middle of the street, totally unresponsive… He was unconscious. Everything we tried to do to awake him was unsuccessful.”

Mellone assembled a rescue kit and administered a dosage of Naloxone, a powerful antidote which was recently added to San Francisco’s rescue kit in March, to save the man’s life. According to SFPD, over 700 officers were trained to administer the Naloxone nasal spray. SFPD Police Chief Greg Suhr hopes to eventually expand the training throughout the remainder of San Francisco.

Naloxone is used specifically for saving the lives of people who overdose on lethal drugs. It has also been referred to as Narcan, which is often used to counter opioid overdose.

In San Francisco, Naloxone is anticipated to be mostly used for heroin overdose, due to its recently reported prevalence across the nation. According to the Centers for Disease Control and Prevention (CDC), lethal heroin overdoses in the United States nearly quadrupled within a 13 year time frame; escalating from 0.7 to 2.7 deaths for every 100,000 reported deaths.

According to the Harm Reduction Coalition “Naloxone is used in opioid overdoses to counteract life-threatening depression of the central nervous system and respiratory system, allowing an overdose victim to breathe normally.”

Mellon spread a dose of Naloxone in the unconscious man’s nostril, and stated in a press conference that within a few minutes of using the spray, the person who had problems breathing, began to show signs of consciousness.

An ambulance transported the man to the San Francisco General Hospital where he was released shortly after.