SAN FRANCISCO—The San Francisco Police Department arrested 10 people in connection to a string of home burglaries that have transpired in the Bayview, Taraval and Ingleside Districts.  The investigation commenced in November 2017, after the SFPD’s newly established Burglary Unit identified a pattern of residential burglaries occurring frequently in several districts. During the course of the investigation, members of the Burglary Unit determined that as many as 60 of the residential burglaries were being committed by serial burglary crews.

Authorities have identified close to 30 suspects in the investigation. Two additional individuals were arrested during the search warrant that was served in Brentwood. The suspects used multiple cars with paper license plates and attempted to disguise their identities during the burglaries. They gained entry to the burglarized homes by forcing their way through locked gates and breaking windows of the homes. Burglaries transpired in occupied and unoccupied residences. 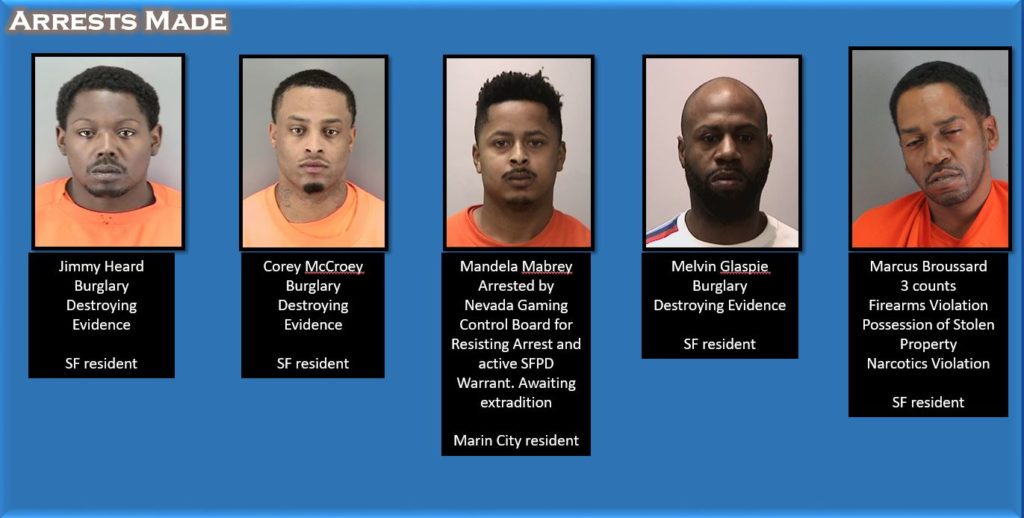 -26 year-old Jimmy Heard of San Francisco, charged with burglary and destruction of evidence

-25 year-old Mandela Mabrey of Marin City, charged with resisting arrest and a warrant

“With these arrests, there has been a marked decrease in burglaries in the Bayview, Ingleside and Taraval districts,” said San Francisco Police Chief William Scott. “Our establishment of a General Crimes Unit to focus on serial residential and commercial burglaries, auto break-ins, bicycle thefts and other neighborhood property crimes is bearing results. We will continue to pursue crime prevention and investigation strategies that will increase safety for all and help bring justice for victims of serial criminals.” 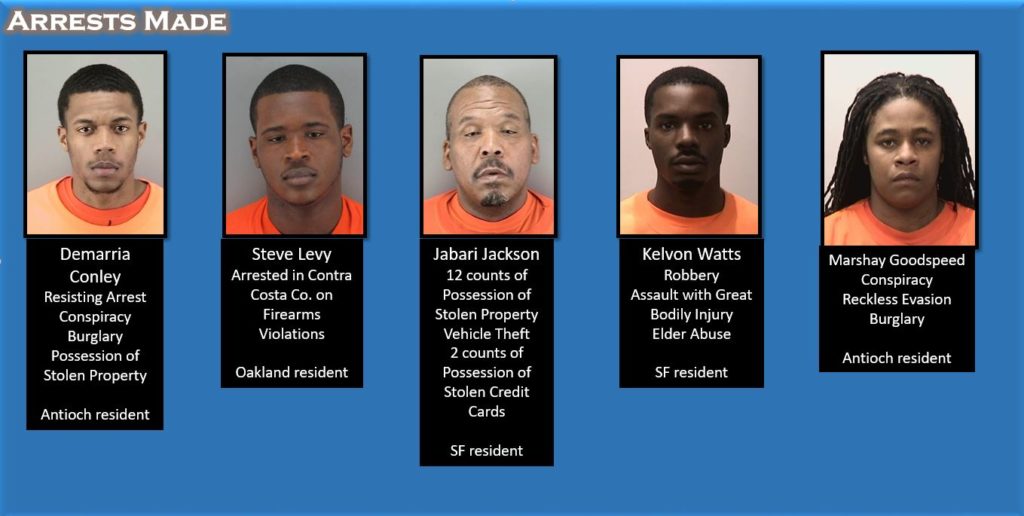 Officials were able to recover multiple pieces of stolen property including jewelry, passports, US and foreign currency and eight vehicles used in the burglaries.

A surveillance video clip that shows several suspects fleeing an elderly burglary victim’s house as she returns home is available online at https://vimeo.com/263244724. The SFPD is still investigating the case. Anyone with details is asked to call the SFPD Anonymous Tip Line at 415-575-4444 or text a tip to TIP411 with SFPD at the beginning of the message.