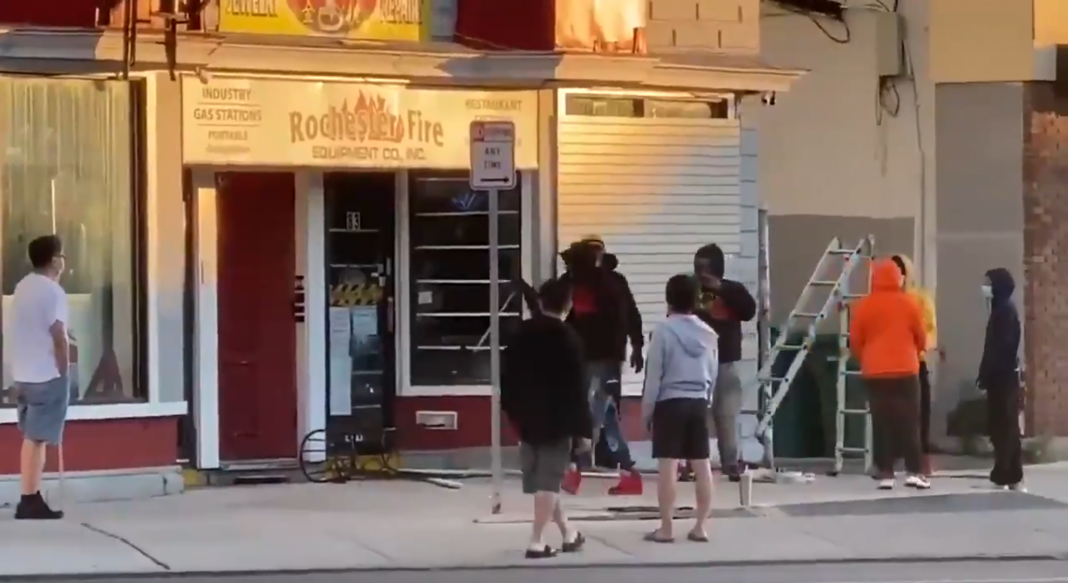 UNITED STATES—On Saturday, May 30, in Rochester, New York, a woman and her husband were attacked by a group of looters outside of their home. The incident was captured on video and shared on Twitter, by a user named Andy Swan. The woman who is being attacked in the video is 24-year-old Madison Mavity, whose home is located above two businesses in the area.

In the video, Mavity is seen exiting her home while a group of several men break the stores’ windows. The men appear to be holding wooden planks and one man is carrying a ladder. At the beginning of the video, Mavity appears to be speaking with the men, and then one individual is seen hitting her front door with what appears to be a wooden plank. The man carrying the ladder throws it at the entrance of the building, which is when Mavity’s husband appears from the doorway.

One of the men in the group, seen wearing an orange jacket or hoodie, begins attacking Mavity by hitting her. Another individual proceeds to join in by beating Mavity with a wooden plank, while two others attack Mavity’s husband.

Mavity’s husband is heard saying “Get away from my wife!” as the looters continue to attack her. One of the assailants turns his attention to Mavity’s husband, and the man begins attacking him with a wooden plank. The video ends. Madison and her husband have sustained injuries from the attacks, but have not yet gone to a hospital for treatment. No further information regarding their injuries has been released.

According to the Rochester Police Department, the attack is still under investigation.