UNITED STATES—A canine was honored by President Donald Trump in his role in helping soldier’s corner ISIS leader, Abu Bakr al-Baghdadi to the back of a cave over the weekend. The dog whose name has not been released to the public is a Belgian Malinois that belongs to the U.S. Army counter-terrorism unit First Special Forces Operational Detachment-Delta. 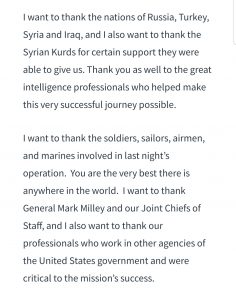 The canine chased Baghdadi down the dead-end tunnel where he had taken three of his children with him, using them as human shields. Baghdadi was wearing a suicide vest which he detonated killing himself and his three children, and injuring the canine. The dog’s name will remain classified.

“The injury to the dog is an injury to one of us,” a soldier told Ceo Magazine. “These dogs are a special breed of courageous.”

President Trump spoke highly of the canine who is said to have been electrocuted and underwent surgery. The Pentagon reported that the animal is back to work.

Fox News reported that the photo was released hours after Army Gen. Mark A. Miley, Chairman of the Joint Chiefs of Staff, shared with reporters in a briefing on October 28, that the dog “performed a tremendous service, was slightly wounded,” but is, “fully recovering.”

White House National Security Advisor Robert O’Brien spoke on NBC’s Meet the Press discussing the fall of Baghdadi. O’Brien indicated that the military operation was named after Kayla Mueller, a humanitarian aid who was reportedly kidnapped and tortured by Baghdadi.

President Trump during a live address to the nation indicated that Special Forces had boots on the ground for two hours and were able to gather intel. DNA biotechnology confirmed that the man in the cave was indeed Baghdadi.