SAN FRANCISCO―A local San Francisco cyclist created a bike route in the shape of a pilgrim hat wearing turkey in honor of Thanksgiving for the fourth consecutive year. 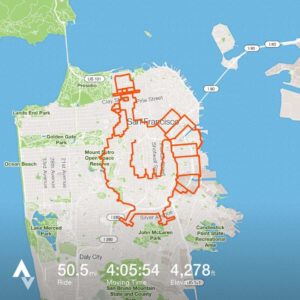 Bret Lobree developed the 50 mile route using his bike and Strava, a GPS app. The official starting line is near Castro and 14th Street. From there, Dolores Heights, the Castro District, and the Mission District makeup the turkey’s wings.

Balboa Park and Portola make the turkey’s feet, as the legs continue through Twin Peaks, Cole Valley, and Haight-Ashbury.

The turkey’s head loops through Pacific Heights and the Marina District. The route then moves south to City Hall where the finish line has been marked.