SAN FRANCISCO—In April, local San Francisco artist Amos Goldbaum painted a San Francisco street scene that was displayed on a boarded-up clothing and gift shop known as The Woods, located in the Mission District. Goldbaum partnered with “Paint the Void,” an organization that was launched to create murals and help brighten up closed businesses around the Bay Area.

A few weeks after the completion of the painting, Goldbaum auctioned the piece to charity, selling it for $2,245. The full-amount was donated to support the San Francisco-Marin Food Bank amid the COVID-19 pandemic.

Before he could ship the painting to the donor, who is the rightful owner, he discovered it was given away without his permission. Goldbaum is trying to locate his missing painting, and has asked the public to help him in his quest. 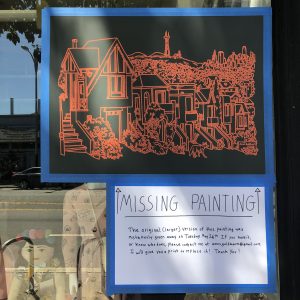 The painting was discovered missing on May 26, when workers came to remove the plywood from the building. For the past few weeks, Goldbaum’s painting had been displayed there, undisturbed. As the workers began dismantling the plywood, a passerby asked if she could have the canvas. One of the workers gave it to her, without realizing its value, or that it was an auction piece.

When he discovered his painting was missing, Amos posted a Tweet which read: “HAVE YOU SEEN THIS CANVAS? There was some confusion today and the people removing the plywood gave this painting to someone walking by on Valencia. If you know who has it, please tell them to contact me! The painting has been purchased and the money sent to the food bank.”

Goldbaum has  given the winner’s donation to the Food Bank, and is concerned that they will not receive the painting in return. If the painting never gets returned, Goldbaum said that he would paint the winner a new one. He also offered to give a print to anyone who has the painting in their possession or knows the person who has it.

“Not the most important thing happening at the moment, but if you hear someone talking about the huge painting they got, let me know!,” Goldbaum humorously tweeted.

He asked that anyone who has information about his missing painting to contact him at amosgoldbaum@gmail.com